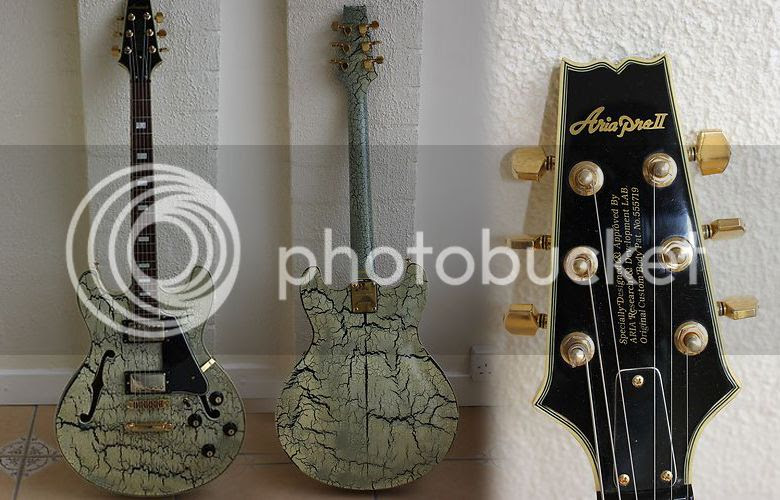 As far as I am concerned, one of the best kept secrets in the guitar world is the Aria Pro II Titan Artist series from the 1980s and 1990s. They are absolutely superb guitars, and are my own guitar of choice. I have two, a 1990s Korean-made TA-40 with Welsh Dragon graphic, and an earlier 1980s Japanese Matsumoko-made TA-30 which is actually my main electric guitar. The Korean-made examples are very good guitars, but the Japanese Matsumoku-made Titan Artists definitely have the edge over them; the differences are subtle, but I feel, important to the overall quality of the guitar. Anyway, this is the subject for a future blog post, one that I will return to later.

This particular Aria Pro II TA guitar (I'm not quite sure of the exact designation - the binding and gold hardware would imply that it isn't the basic bolt-on neck TA-40 model; it's possibly a TA-60) is finished in a very dated 1980s "crackleburst". I'd quite forgotten about finishes like this. Didn't Washburn produce a similar "magma" finish? Whatever, it really is quite awful and doesn't do the guitar any favours.

This guitar is currently listed on eBay UK with bidding currently at £51. I'd expect a guitar like this to sell for up to £200. I personally wouldn't want to spend more for a Korean-made TA, but a Japanese example would be worth forking out more for.

EDIT: Sold for £186.89 which seems fair enough but is in the region of the upper limits of what you'd want to spend on a Korean-made Aria TA.