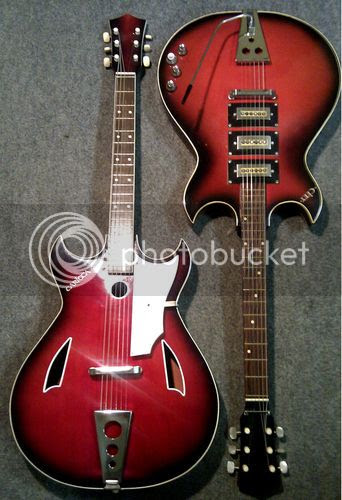 guitarz.blogspot.com: I know very little about this pair of guitars but I was intrigued to see them being offered for sale on eBay, where the sellers tells us:


The guitars were made in Croatia (ex Yugoslavia) in Muzička naklada Zagreb factory.

The 3 PU electric model (hollow body) is called City and the acoustic model is called Carioca.

Guitars are hard to find separately so they are very, very rare in pair. Both guitars are in very good condition for their age.

There are some marks of use and some laquer cracks on the both of them but normal for their age. They both function mechanical very well. Guitars are with all original parts except for th electric - City where one pot knob is not original.

The guitars were made probably at the end of the 60-es or early 70-es. Muzička naklada Zagreb was one of two musical instrument companies in former Yugoslavia and a lot smaller than Melodija Mengeš, so the guitars are hard to find.

These guitars are currently being auctioned as a pair by a seller in Croatia with a starting bid of £400.

© 2013, Guitarz - The Original Guitar Blog - the blog that goes all the way to 11!
Please read our photo and content policy.
Posted by Gavin Lloyd Wilson at 10:29 pm