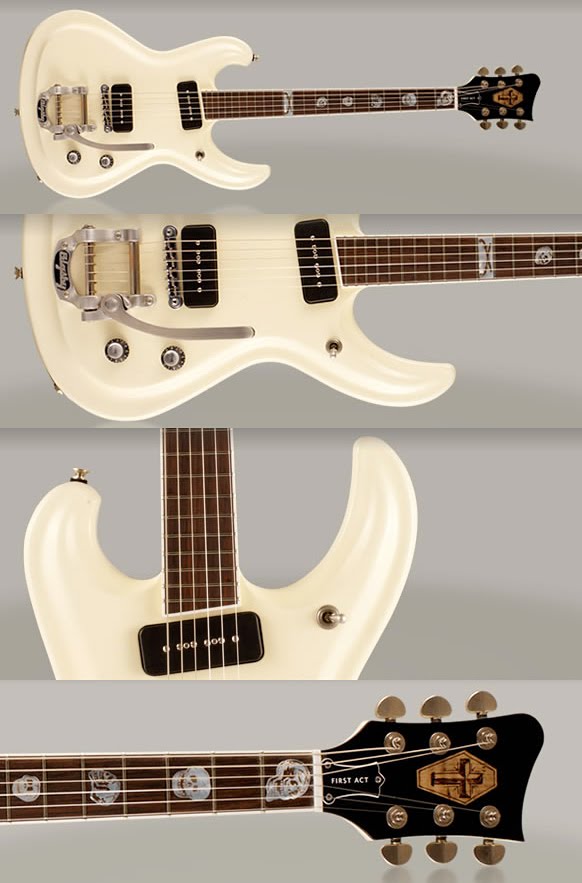 Today in the Spanish speaking world, is the Day of The Dead. To celebrate that, we have a suitably bone coloured, skull encrusted, coffin topped instrument. On paper, the final design of this custom built guitar could, in some hands, have ended up very differently and lot less tasteful. We've seen on several occasions, here on Guitarz, the fruits of the unrestrained and unfettered creativity of some instrument builders which have not always raised the luthiers art to the highest of aesthetic pinnacles.

In my humble opinion, Jimmy Messer's DOTD guitar built by First Act is a rather beautiful and elegant instrument. Best known as guitarist for Texas band Goudie and guitarist/co-composer with Kelly Clarkson (American Idol winner), Jimmy has commission several guitars from First Act so he must be pretty pleased with them.

OK, I know there must an American reader or two falling his chair right now. First Act are best known for the their kid's starter guitar packs from Target/Walmart in the US. I've never heard of them but it seems they are also available in Blighty. So if anyone has tried their budget guitars, I'd love to know what you think.

Quite apart from their nicely designed custom guitars, their web site has a lot of interesting things going on that take it beyond the realms of other guitar makers. I'm a big fan of businesses that get out into the community and encourage kids to be creative and there are some bigger manufacturers that could do worse than to take a leaf out of First Act's book. Worth spending some time there. Guitar business of the day!
PS Happy DOTD to one and all.
David in Barcelona
Guitarz - The Original Guitar Blog - now in its 9th year!
Posted by Bat Tao Lo at 4:10 am