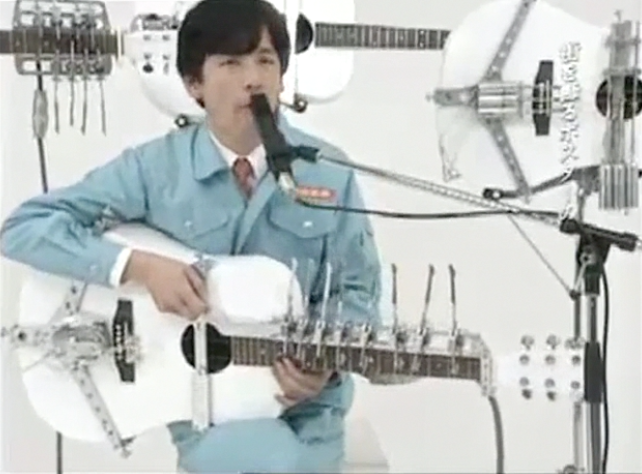 In the land of the self playing guitar machines, the one armed guitarist is king. I think Tom Waits said that
We've featured art-guitars before (The Destroyer and the Les Paul-playing sparrows spring to mind) but I'd like to bring to your attention another little artistic gem - and to recount a little of my rather relaxed Sunday.
When not following the antics of the Papal entourage in this beautiful and still quite Catholic city (today the Sagrada Familia is officially a bona fide church), I found myself tinkering round with a Gakken SX 150 synthesiser kit - bought a while back but not really explored in any depth. With the kit came a thick, glossy magazine cum instruction brochure.

I hadn't take much notice of the magazine before as it's in Japanese and obviously hard to understand. Actually a lot of it is about nutty japanese artist/musicians so it's all but impossible to understand - probably even to the Japanese.

That may not be totally fair because it does actually look really quite fascinating. "LOOKS" is the operative word in a lot of the instruments featured in the magazine. It wasn't obvious at first but a lot of Gakken's instruments are quite experimental with an emphasis on the "mental".
In the magazine there are unusual instruments played by the likes of musician/artist Maywa Denki, for instance, that combines guitars, electronics, art and comedy (well, I assume it's meant to be funny). I've not heard much of him before (apart from his Otamatone, the musical tadpole) but he seems to be quite "Big In Japan", he he!

Back to my day: I spent a jolly morning listening to electronic music, the afore mentioned tinkering, making a rabbit and sausage casserole and after lunch - after the siesta after lunch that is - I spent a pleasant afternoon Youtubing Gakken, Maywa Denki and weird Japanese videos - with a slight diversion to the astounding, and apparently nice lads, Muse.

Anyway... this impressive, though for him quite conventional, video is a great example of his inventiveness. It's a bit long and the best bit doesn't kick in till 2 minutes into the video. But it's worth it.
As a viewer with the rather telling nom de plume of Merzbowxnoise says "Everything is possible in Japan!"

I can't see Sir Eric Clapton taking up this contraption just yet.
Rock on! David from Sacred Barcelona
Guitarz - The Original Guitar Blog - now in its 9th year!
Posted by Bat Tao Lo at 4:46 pm