Even those who've only been reading this blog for just a couple of months will have noticed that I have a soft spot for electric 12-strings. Here is one of the classics, the Fender Electric XII, introduced in 1965 and remaining in production for five years. The body design owes a lot to the Jazzmaster and Jaguar guitars, and the headstock is an over-sized hockey-stick shape - I can only assume so as to have somewhere prominent to display the Fender logo! (I have a Fender Strat XII and the Fender logo is somewhat lost in the middle of the small headstock that guitar has. You can imagine what an aggressive Marketing Department might think of that!) 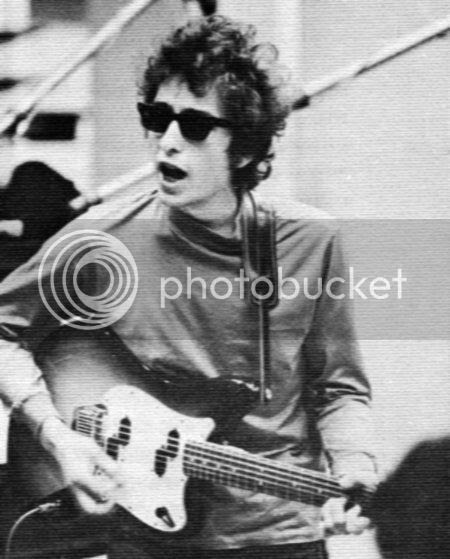 The Electric XII was supposedly designed from the ground up to be a 12-string guitar, rather than being an adaptation of an existing 6-string guitar design. It's funny that in more recent years Fender have resorted to issusing the 12-string Stratocaster instead of this beauty. However, I'm sure the Custom Shop would knock one up for someone willing to throw the right amount of money in their direction.

It's funny, everyone thinks of the Gibson doubleneck as being the "Stairway to Heaven" guitar, but on the recorded version on "Led Zeppelin 4" (or "Four Symbols" if you will!) it was a Fender Electric XII that Jimmy Page used for the 12-string parts. The guitar has also been used by, amongst others, Lou Reed, Jeff Beck, Pete Townshend and Bob Dylan (pictured right).

See here also for a rare left-handed version. (Well, I'd never seen one before!)

The above-pictured black example is a refurbished Electric XII and is currently being offered for sale on eBay with a Buy It Now price of £1,850.