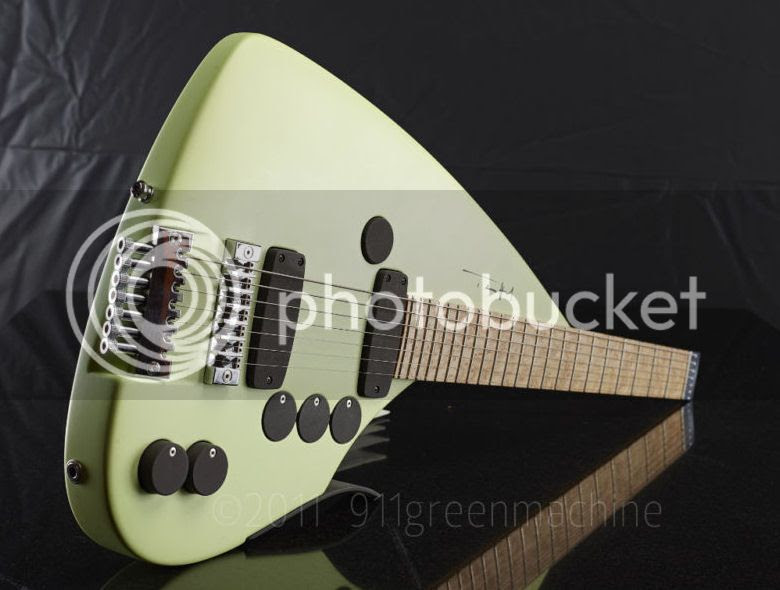 Everything about the Teuffel Tesla guitar screams "modern" and "innovative" at you, yet despite its space-age design the Tesla is the antithesis of all those modern "perfect" guitars and is designed specifically to emulate some of those idiosyncracies exhibited by some of those older planks we have struggled with. As Ulrich Teuffel says on his website:


In the early days of electric guitar building, you had to struggle not only with the guitar itself, but also with the unwanted background noises that guitars produced in those days, for example, pickup feedback resulting from pickups not yet being wax-potted, or loud humming coming from a loose solder joint. Sometimes the guitar signal would be interrupted when you randomly touched a knob.

Nowadays all these effects have disappeared as a result of technical improvements, although they have become part of music history as archetypes of guitar sounds. They are comparable to sounds such as the scratching of records and skipping of CDs, which have also become musical archetypes and are often cited in today’s music.

With the Tesla I have designed a guitar that, along with modern guitars sounds, also has these primitive sounds at its disposal. Contact points and push-buttons are situated all over the body, which, when pressed, activate the respective sounds.

The above-pictured 7-string Tesla, currently for sale on eBay with bidding at over $4,000 as I type this, has a glow-in-the-dark finish and - as requested by the customer - is the only example to feature glow-in-the-dark side dots along the top of the fingerboard.

The short neck (or is it an extended body on the bass side) make the Tesla an ideal candidate for a 7-string guitar, the rigidity of the body providing excellent bass response.

But if you're one of those "hook the thumb over the top of the neck" players, forget it. This guitar is not for you!