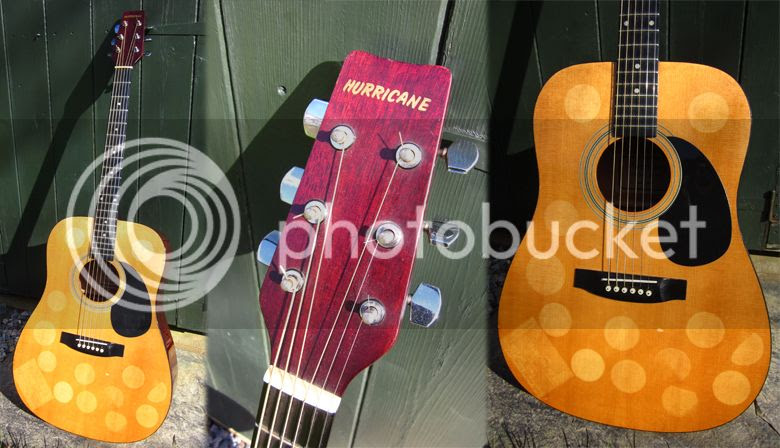 These photos illustrate quite nicely the evil presented by stickers and why they should never be allowed to sully a guitar's appearance. This guitar had its stickers removed after many years and whilst the uncovered finish of the guitar's top had changed to a more golden colour with age, the area beneath the stickers has remained the original colour.

Actually, this is my guitar. I bought it in this condition last week, and despite the above little rant I really am not bothered by its appearance. In a way, it adds character, but more to the point I really don't care because I got an absolute bargain here. It only cost me £20 (OK, call it £30 with post and packing). I don't think anyone else was bidding because of the appearance of the guitar. But, it's a really nice player (much better than my Ovation "thing" with the horrible action and which set me back between £300-£400 a few years back). I can't tell you how pleased I am with this guitar.

But... Has anyone heard of Hurricane guitars? The name sounds familiar, but I can't find out anything much about them. Apparently they made a few of the usual Fender and Gibson solidbody knock-offs. This acoustic was made in Japan - the seller reckoned 1970s but I tend to think 1980s is more likely - and the label inside the soundhole tells us that it's the Model BF-402. It's quite obviously a Martin copy, but its not a top of the range guitar. Witness the simple black binding on the body and total lack of neck binding. The tuners are also of the open-back type, although they function perfectly competently. The Hurricane logo is a quite a simple affair, if you could even call it a logo. It's just the name set in a particular font, and with the individual characters at different heights it looks as if it was designed using LetraSet letters (who remembers LetraSet? They were sheets of transfers that you had to apply to a surface by rubbing and peeling away the backing sheet).

So, anyway, the lesson is keep checking those auctions, and try to see beyond initial appearances.