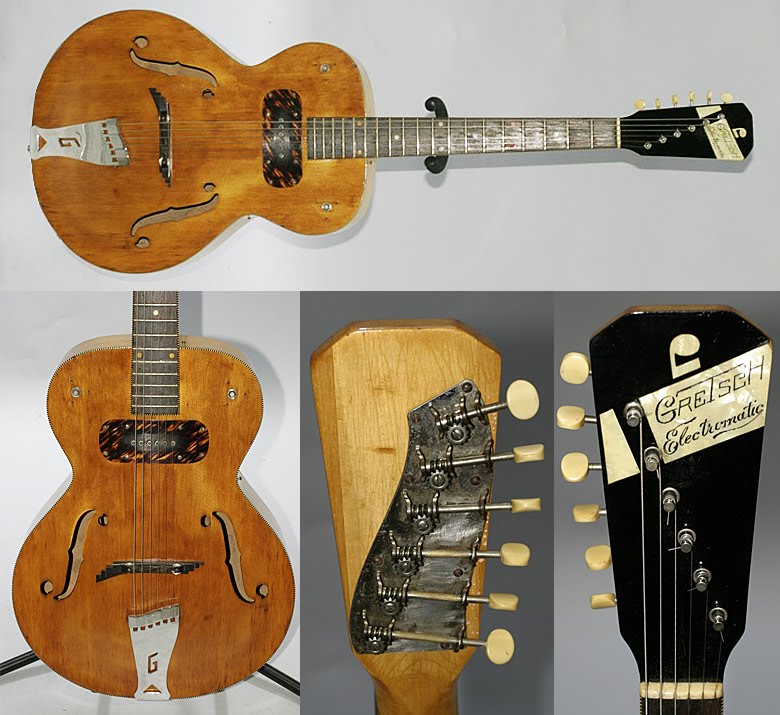 This surprisingly well preserved Gretsch Electromatic currently gracing eBay is quite a beauty. It has some remarkable features but the most unusual, for me, are the machine heads. We showed a Modulus Genesis G3 a while back that had compensated tuners to keep the strings in a straight line and this appears to be an earlier attempt at the same idea. I think this is what's known as an "engineering solution".
I'll let the sellers describe the rest:

This is for a 1947 Gretsch Electromatic Hollow-body Spanish Electric Guitar. This terrific guitar looks great! The top and back of the body do not have any cracks or chips in them. The right side of the body has two screws driven into, one right next to the neck and the other right next to the top binding between the upper and lower bouts; the screw between the bouts appears to have a couple of very small cracks extending about 1/8" away from it kinda parallel to the binding, but the other screw does not have any cracks involved with it. The top, back, and sides all show a few dings and indentions in them as well as a few very light surface scratches - none of which is through the lacquer to the bare wood. The inside of the body appears to be a bit dirty and some of the wiring is not original. However, the pickup and potentiometers do appear to be original.
The output jack is loose and needs to be re-attached and the knobs are missing on the front. The neck and headstock both show similar surface scratches and indentions as those found on the body, but are also free of cracks and chips. The tuners on the headstock are also original. The fretboard has a some noticeable spots of what appears to be dried glue on it, plus the frets show some fairly heavy wear, but are still playable. The action on this guitar is about medium-high and it plays well and sounds wonderful. This amazing guitar features a scale of 25-1/2", a 1-11/16" nut width, a 19-fret (14-fret accessibility) rosewood fretboard, and a Gretsch tailpiece.

I'm not 100% convinced that the tailpiece is original, personally.
David - Slacking in Barcelona
Guitarz - The Original Guitar Blog - now in its 10th year!
Posted by Bat Tao Lo at 7:04 am