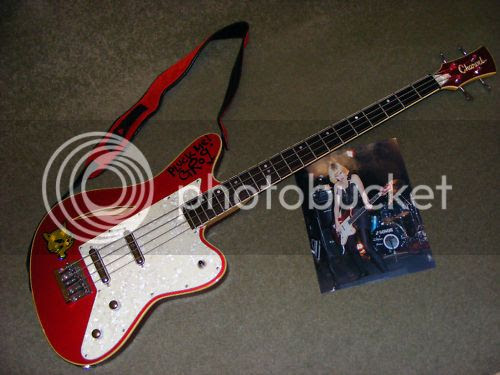 Here we have a Charvel Surfcaster bass up for grabs on eBay. This particular example was previously owned by singer and bassist Grog and used in her bands Feline and Ultraviolet, before evolving into the darker, heavier  three-piece Die So Fluid (I believe she favours G&L basses these days). It's a thinline bass with a hint of Rickenbacker in its design. Unlike many guitars and basses we feature here on Guitarz, I can personally confirm that this bass plays and sounds fantastic having witnessed it in action on quite a few occasions and also on having tried it out. Grog actually had two of these basses - this red one and another in black (who knows where that one ended up). At one gig I went to, she ended up throwing both of them on the floor. They were obviously built to be able to withstand a lot of abuse and hard gigging.

First manufactured in 1991, the Surfcaster guitar and bass were something of a departure for Charvel, who up until then had mainly been concentrating on the pointy-headstocked superstrat market. As the name implies, they were aiming for more of a surf vibe, and the guitar was also being marketed to the country market, the Chandler lipstick pickups being suited to this sound.

However, they were also capable of a heavier sound, as evidenced in this video of Ultraviolet (below). Watch out for Grog's Surfcaster bass - the actual one for sale on eBay right now.

One last comment - don't confuse these Charvel Surfcasters with the later inferior "Made in India" Jackson models. Those awful guitars sully the Surfcaster name.