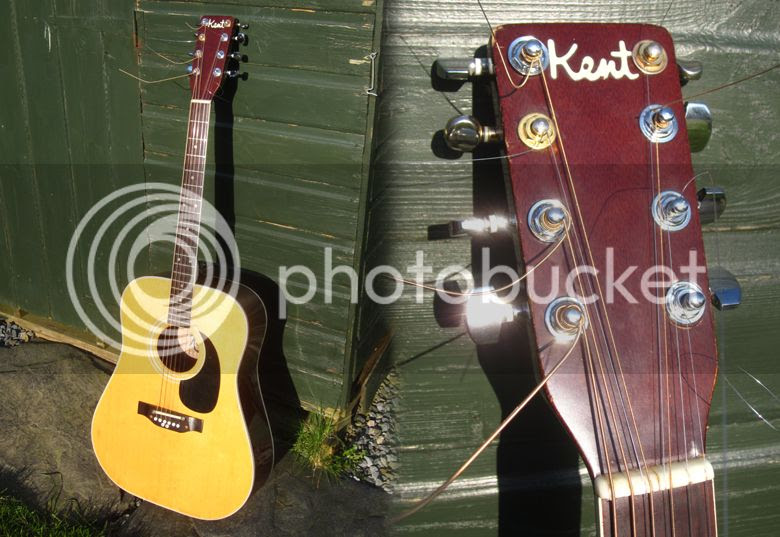 I've spent the best part of today converting this unsuspecting acoustic guitar into an 8-string. It's a (possibly 1980s/1990s) Kent-branded acoustic that I bought very cheaply off eBay recently because I wanted a back-up guitar for my main acoustic guitar. However, for one of the songs we are doing at the guitar club I attend, I've been hankering after a 12-string sound. But as I don't currently have a 12-string acoustic (to to be honest I don't really get on with them too well as they can be hard work in a number of ways) and also because I have very limited finances, I decided to make use of bits and pieces that I already had and convert a 6-string into an 8-string. That's an 8-string with 6 courses - octaves accompanying the G and D strings. It's a compromise in some ways, but one which I think will work for what I want.

The Kent's tuners were really rather dreadful, so I swapped them out for a set coming off a donor acoustic I have lying around (on which the bridge has lifted, so I'm just using it for parts now and maybe a future project). From all the screw holes in the back of the Kent's headstock, it seems that someone has previously swapped out the tuners - I'm guessing in that instance they were taking nicer tuners off for another project and replacing with something really quite nasty and ineffective because the ones I had to remove were ghastly.

For the two additional tuners, I used a pair that originally came off a Washburn guitar I used to own. You may notice in the above photo what might at first seem like an odd placement of these tuners. My reasoning was to use the two different tuners for the two octave strings. 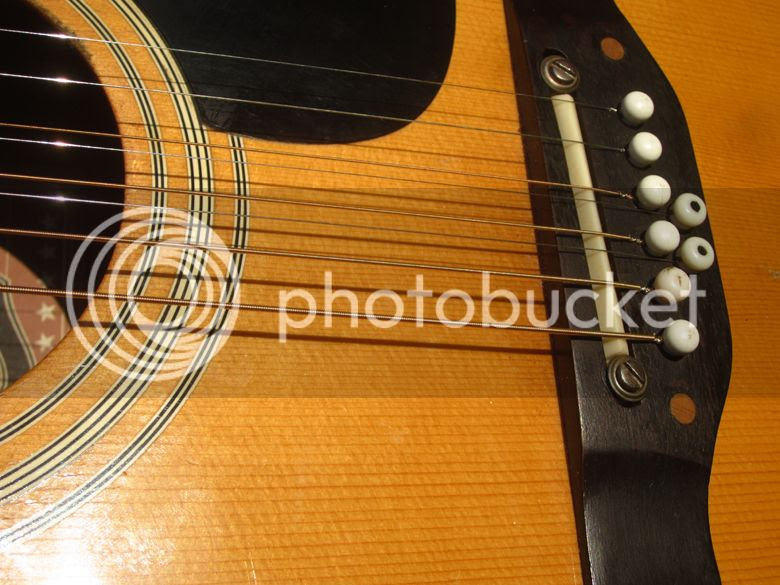 Anyway, I've strung it up, tuned it, and it's really quite effective with a sound that's not quite as rich as a fully-fledged 12-string guitar, but which comes close - and that's just from adding octave strings to the G and D.

Hopefully it should be less trouble than a 12-string. Easier to re-string, easier to tune, and what's more it doesn't have that annoying wide fingerboard that many 12ers have. I'm aware that it looks a bit "Heath Robinson" perhaps, but I don't care too much about the aesthetics in this instance. It's the sound that I was after.

This conversion cost me nothing. I used a guitar, parts, strings and tools that I already had.