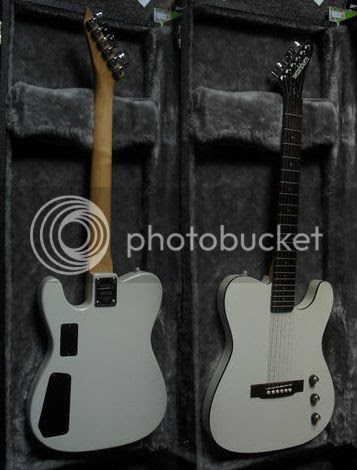 This Washburn SBT-21 is a Tele-style guitar with a pointy 1980s-style headstock and looks like it is a relation to the Washburn Tour 24 Tele.

At first glance it would appear to be an electric guitar with no pickups, but the acoustic style bridge is a dead giveaway as to its true function - of course it has piezo pickups under the bridge saddle.

I guess this was designed for (hair) metal bands who just couldn't bring themselves to use a proper acoustic guitar for live shows (which wouldn't look "metal" enough, or some such nonsense).

These days a guitar such as this is more of a curiosity than a practical versatile guitar. As a "solidbody acoustic", it's neither one thing or the other. Electric players will want a guitar with magnetic pickups, whilst those wanting an acoustic sound would be better served with a genuine acoustic or - if they must - electro-acoustic guitar. Now, if this guitar had magnetic pickups in addition to the piezos, then it could be a truly useful hybrid instrument. Having said that, the pickup-less solidbody look is quite cool, and thank goodness Washburn didn't stick a faux soundhole on it and place slider volume and tone controls on the upper rim.

This guitar is currently listed on eBay UK with a starting price of £180 and a Buy It Now price of £300, which seems quite reasonable for a not too common 1980s-era Japanese made guitar. Alas, as explained already, it is an instrument of limited appeal; unless. that is, you are the occasional guitar strumming singer of a hair metal band wanting a guitar for those cheesy power ballads.