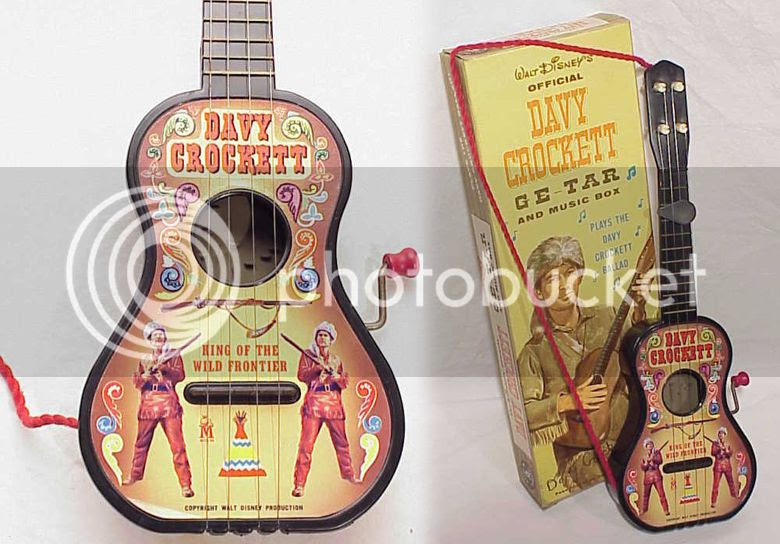 Sometimes we like to take a look at vintage toy guitars as often they are as collectable as the real thing, and are also very interesting cultural artifacts.

This particular Walt Disney Davey Crockett guitar (or "ge-tar" as it's spelt on the box) is of course a piece of movie memorabilia so could possibly appeal to collectors of film ephemera as well as guitar and toy collectors. Made by Mattel, at first I was not sure if the eBay seller's dating of 1953 is correct seeing as Walt Disney's "Davy Crockett, King of the Wild Frontier" was released in 1955. But then again, that film was comprised of three Disney television specials edited together, the first of which was originally broadcast in December 1954, so maybe these guitars could have been produced in advance?

The cynic in me wants to say it's hard to picture the King of the Wild Frontier playing a 4-string plastic "ge-tar" with his own picture on it which also conveniently functions as a music box using a wind-up handle on one side, but then I guess kids have better imaginations than us adults and wouldn't consider such issues. Still, it's a nice item, in good condition and with the original box, so it'll be interesting to see what this fetches in the eBay auction.