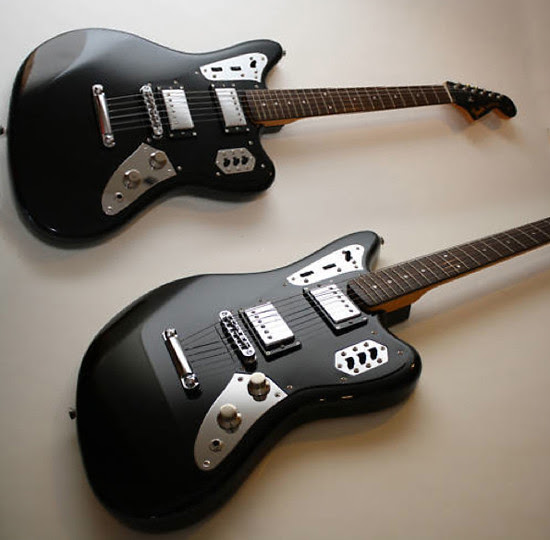 The Fender Jaguar Special HH could seem not so special - well, it's just another Jaguar -, but - beside its name - it's very special to me since I'm the proud and happy owner of one of these babies.
It was love at he first sight (and I was a Fender hater until then - now I'm just a strat hater) after being faithful for about 20 years to my Rickenbacker 620 and my Ovation Breadwinner! It has a kind of perfect look, not with the classicism of a Les Paul or a ES-175, but in its own twisted way despite the venerable age of the Jaguar (see the previous Jaguar post).
So the HH (as it's often nicknamed) has the usual design, 24' scale and typical complex electronics of a Jaguar, but it's mounted with Fender's Dragster Humbuckers - sounding really superb - and a tune-o-matic style stop tail (official name is Adjust-o-matic, must be American humor). It has a simple black nitro finish and black pickguard and lots of chrome, and a super cool 1969 strat headstock with vintage tuners. You put your fingers on the neck and they start to play on their own and to do things you didn't know you can do.
It was made in Japan in the 2000s, and I found contradictory information about it being exclusive to the Japanese market or not. I thought so for a long time and it was sold to me as an import - and you don't see it so often around -, but this is not mentioned on the Fender website so it's doubtful. There is also a baritone version (a real baritone, not a 6-string bass), that I will accept as a present any time.
bertram


Guitarz - The Original Guitar Blog - now in its 9th year!
Posted by bertram at 7:46 am