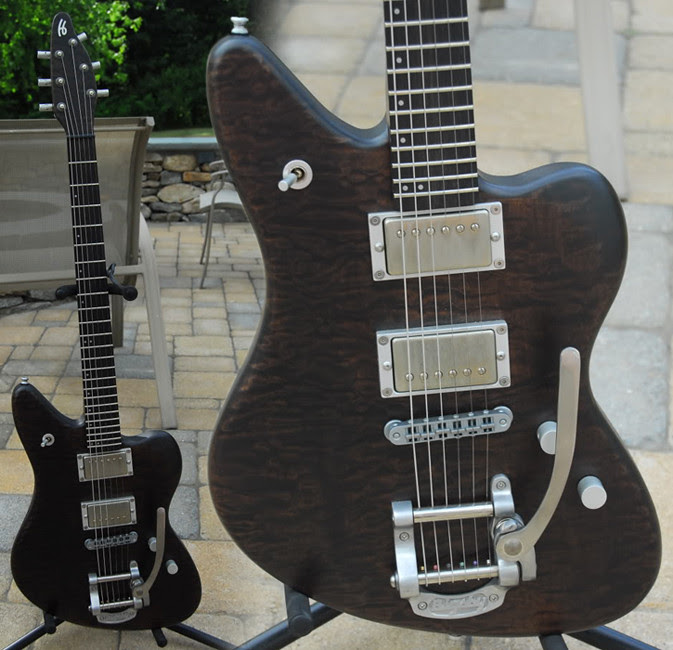 With this Jazzmaster-looking Henman-Bevilacqua S1, Henman Guitars proposes an interesting combination of classicism and... well, I cannot say modernism or high-tech, since electric guitar is ontologically modern and high-tech, so let's say progressiveness. You could say that there's nothing new in the two humbuckers (tappable though) and Bigsby trem but if you look closely at all the details, you will see that this guitar has clearly something (I just wish they wouldn't spoil a transparent black finish with a figured maple top when the body is made of solid mahogany...).
If you are interested in this Hen-Bev S1, go and have a look at their website, they have plenty of technical specs about stuff like their avant-garde tuners and truss rod, plus a couple of video demos that allows you to hear its terrific sound (very rock/blues though - but it seems that it's what 99% of players expect - ah, and someone should tell the demo player that an emo haircut after 21 is pathetic).
About the Jaguar/Jazzmaster design, it's strange but I have to admit that though it's been introduced in 1958 - shortly after the Telecaster (50), the Les Paul (51) and the Stratocaster (54) - and widely spread in the 60s by European companies (mostly Italian and German), it didn't turn into a boring cliché but kept a radical feel - probably because it wasn't overexploited by Fender. So Henman played it safe when they chose this design, both familiar and with a maverick spirit.
bertram

Guitarz - The Original Guitar Blog - now in its 9th year!
Posted by bertram at 11:59 am