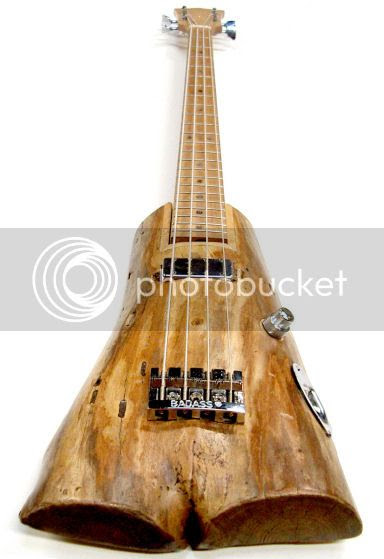 Now he's back with a new log-based 4-string creation, named "The Crotch" which he claims is possibly the sexiest bass alive today.

Sounds and plays great with an exellent sustain and a deep rumble bassy tone.

Ras has even sent in an accompanying joke, which must be a first for Guitarz:

A tree grows up in the forest and doesn't know what kind of tree it is. So it decides to ask the Maple tree: 'Hey, Mr. Maple, I am trying to figure out what tree I am!' So Mr. Maple looks at him and says: 'I am not too sure, why don't you ask Mr. Pine over there?'

Ok so the young tree goes: 'Hey, Mr. Pine, I am trying to figure out what tree I am, can you help me out!' And Mr. Pine says: 'You know, I can't really tell from where I'm standing, why don't you ask Mr. Oak, he's been around the longest.'

So the little tree goes: 'Hey, Mr. Oak, I am trying to figure out what tree I am, any ideas?' Mr. Oak looks at him and says: 'You know, I am not too sure whether you are a son of a Beech or a son of a Birch, but your mother was definitely the best piece of Ash in the forest ...'

So there you go, a wood-based joke for all you luthiers and lovers of tonewoods. (Don't I remember an episode of The Phil Silvers Show in which Sgt Bilko was trying to persuade a bunch of TV executives that wood was currently what everyone was laughing at?)

Guitarz - The Original Guitar Blog - now in its 9th year!
Posted by Gavin Lloyd Wilson at 10:43 am