Gorgeous guitars from The Creamery 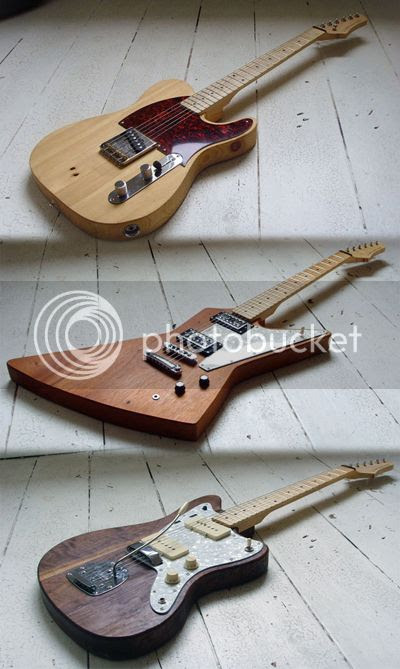 I've been meaning to feature The Creamery on this blog just about all year, but was waiting for the website to go live, which I believe it did last month... but then, I got side-tracked as I so easily do these days!

The Creamery are based in Manchester in the UK, and is the operation of Jaime Campbell who builds one-off custom guitars of the bolt-on neck, slab-bodied variety. Naturally this means Telecasters and Esquires as you might expect, but also some other body shapes too including Explorer (The Alleyway) and, my own favourite, a slab-bodied Jazzmaster (This Year's Model) inspired by Elvis Costello's guitar.

Jaime likes to use recycled woods and has posted on Facebook and Twitter about raiding skips to claim a piece of timber that someone else has just thrown away. The Fenchpost (pictured top left) for example, is an Esquire-type guitar with a body built out of an old pine fence post and which still has the nail holes proudly on display as a feature. I think it looks fantastic.

Another Tele-type has a body built from a butcher's block (The Butcher's Block) which not only gives it a unique appearance but is common sense, making use of a quality timber product which is quite frankly wasted on a mere chopping board.

I should also mention that Jaime also handwinds his own The Creamery brand scatterwound pickups, which are available to buy on their own without a guitar attached.

I can't wait to see what's next for The Creamery. I believe a Prince-style Telecaster is in the works.