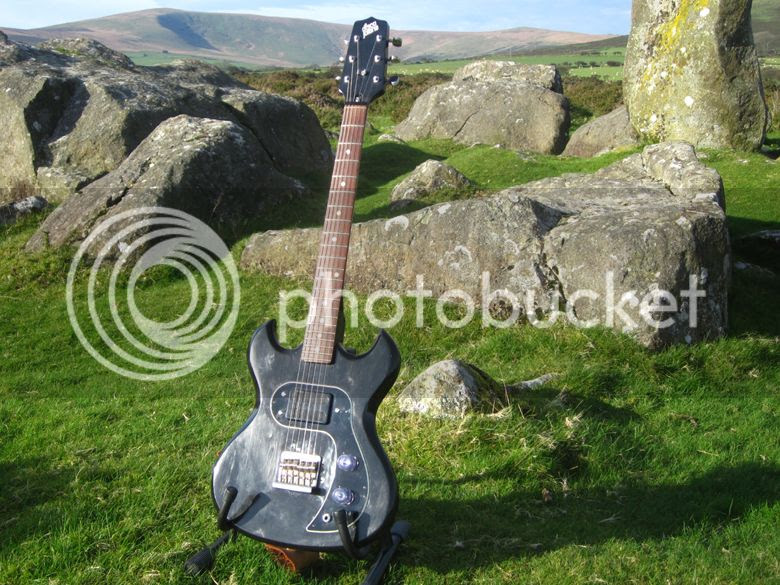 Regular readers of Guitarz will know that we have a particular affection for Soviet-era East European and Russian guitars. When I saw this Jolana Disco guitar from 1980s Czechoslovakia listed on eBay UK recently with a Buy It Now price of just £60, I knew I had to buy it; indeed I think I would have been failing in my duty as a Guitarz author if I hadn't.

The Jolana Disco is a very basic model guitar, that much is obvious just from looking at it. It's a no-nonsense, simple electric guitar. Single pickup, volume and tone controls, no trem or any other fancy gubbins. The design, whilst quite clearly derived from the Gibson SG, is squat, pointy and - dare I say - it's a little bit of an ugly duckling. In fact it reminds me of certain Burns guitars, and I mean that as a compliment. 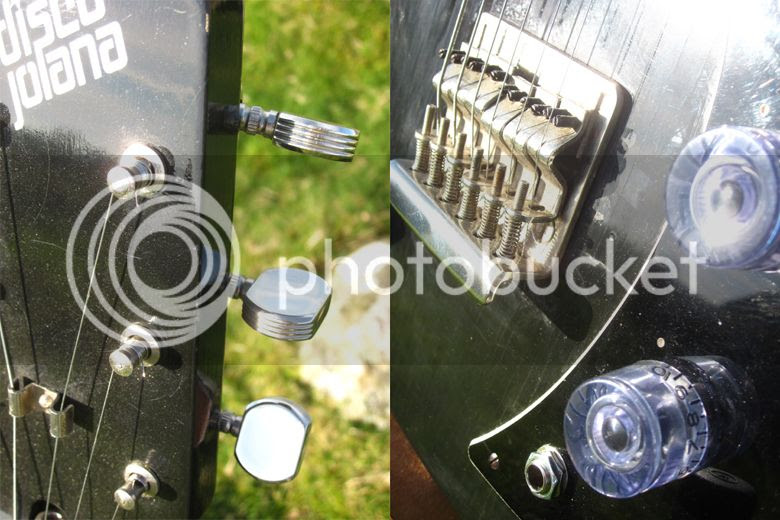 Because it was made in Soviet-era Eastern Europe we do not have here a guitar be-decked with all the same hardware - pickups, tuners, bridge, etc - as found on countless other brands. The Jolana features home-grown hardware which makes it all the more idiosyncratic. The tuners, for example, are huge and, in my estimation, quite attractive. They are hardly the best tuners in the world, but they seem to do the job. The bridge is highly engineered and shaped from pieces of sheet steel, and is fully adjustable; it looks a little unusual when we are so used to seeing the same old bridges everywhere, but it is fully functional and does the job.

The finish is black and THICK. I suspect that it may hide a body of cheap timber - I don't think it's plywood because you normally see the telltale ridges of ply where the finish has sunken in around the sides of the guitar. 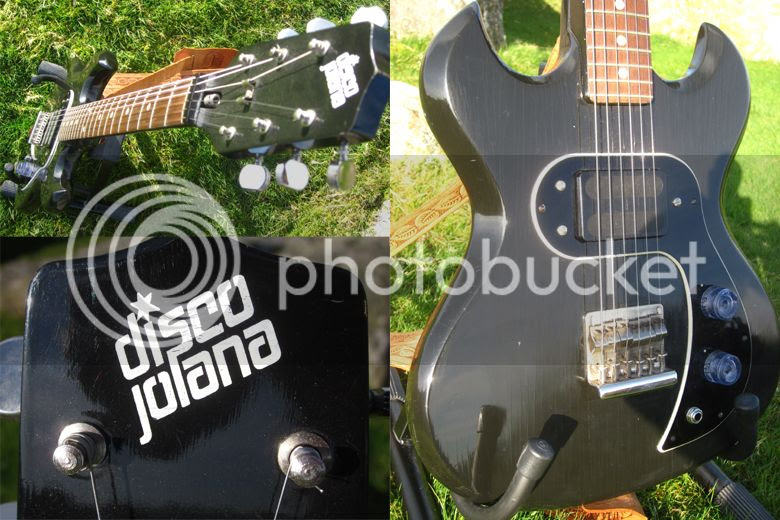 The Jolana Disco has just a single pickup, and what a pickup it is! It's a HUGE humbucker and is positioned slap bang in the centre of the guitar's body. To my ears it sounds great and can provide everything from a crystal clear bell-like tone to downright raunchy overdrive. The positioning might throw a few people, and although I'm not usually a fan of tone controls on guitars, in this instance the tone control is essential in making sure you have the required amount of treble.

The volume and tone controls have over-sized chunky clear plastic knobs which I find quite ugly, and which do look rather cheap. The pickguard (or scratchplate) is quite minimalistic and is essentially an over-large pickup surround combined with a control plate. 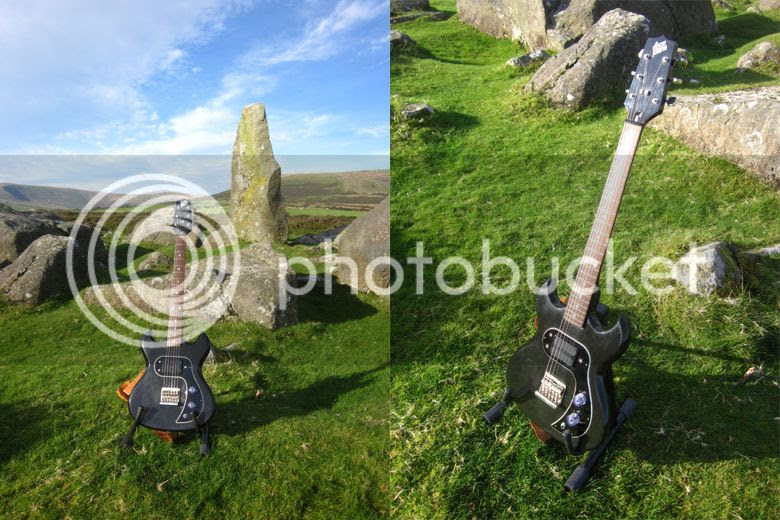 I've read reviews of this guitar where the owner has commented with words to the effect that it is virtually unplayable. Well, either they had a particularly bad example, or else - as I suspect - they weren't trying hard enough to get on with the guitar and to allow it to shine.

I admit I found it awkward to play at first. The biggest hurdle to overcome is the high radius of the fingerboard. Boy, that fingerboard ain't half got a curve to it! If you prefer your fingerboards flat or virtually flat, you'd be in for a shock with this Jolana. Still it doesn't take too much perseverance to become accustomed to the fingerboard radius, and I feel the results are well worth it because this guitar is quite playable once you get over that initial shock.

The other thing that might freak you out is the position of the pickup, which as I have mentioned already is slap bang in the centre of the body. I hear so many people say, "Oh, I only ever use the bridge pickup," and that is something that never ceases to amaze me. I think this goes back to guitars that have those stupid "Rhythm/Treble" legends on their pickup selector switches (Yeah, Gibson and their imitators!). Put simply, the mental process goes like this: Lead guitar is cool, rhythm is boring. Who wants to be a rhythm guitarist? So this totally erroneous notion that the neck pickup is the rhythm pickup and the bridge pickup is the lead pickup, i.e. the COOL pickup, has been perpetuated. Well, it's complete bullshit. Most guitarists rate Jimi Hendrix, so I say to them check out video footage of Hendrix (the Hendrix at Woodstock DVD is a good one), check out the close ups and tell me what pickup he uses for most of his solos. Yup, you've guessed it, it's the neck pickup. And then tell me that that's NOT lead guitar playing.

So, for a single pickup guitar, I'd argue, the obvious position for a pickup is in the centre. It's neither too trebley nor too bassy. Sure, it's a compromise to some people, but as I've said you can bring the tone control into play. And really, I think that's all you need.

So yeah, I LIKE this little ugly duckling of a guitar. I admit the action could be improved upon, it has a slight tendency to neck heaviness (small body, large headstock) and it does have a few little rattles here and there, but to me these add to the character of the instrument. All in all, it's a highly playable no-nonsense guitar, and I would happily play it in a band situation.

P.S. The photos in this blog post are my own work, so please do not copy or re-use without asking permission first!