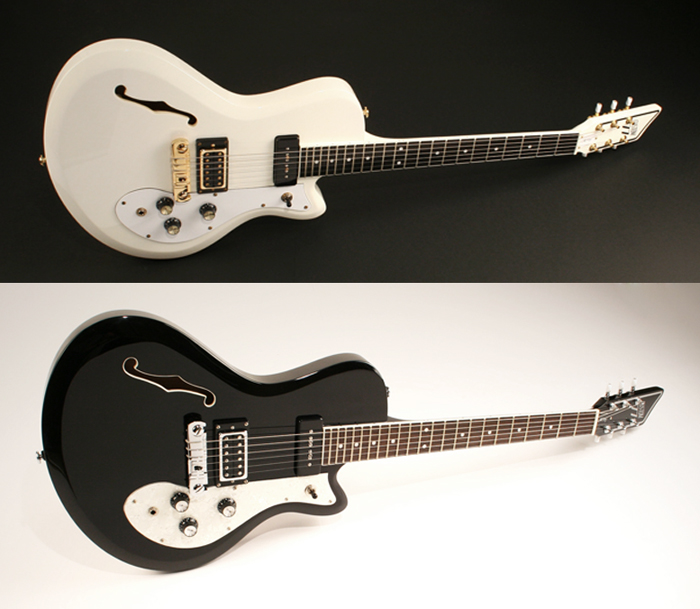 I know that I probably spend much too much time ranting here about how unimaginative guitar making became in the last decades, so let's cut the crap and rejoice over creative luthiers and small companies that can still produce guitars such as the Custom 77 Roxy, an original yet sober, timeless and classy semi-hollow wonder that has everything it takes to become a new classic.
I love this guitar, firstly for its beautiful bevelled outline, both sensual and dynamic, and the fact that it's a semi-hollow that doesn't have to be a copy of an ES-335 to have credibility. I also appreciate the Duesenberg-style bridge humbucker + neck P90 combination, the simple pickguard, the wraparound bridge, the old-school F-hole on this radical body, and the controls positions seem to be well thought - not just placed where tradition tells... I just wish it was bigger but it's just because I'm big and I'm still looking for my dream semi-hollow guitar!
Custom 77 is an interesting French guitar company that released nice original models, on top of producing the inevitable Fender/Gibson copies (it's probably necessary to generate basic income, but that's the buyers's fault, isn't it?) - all with Iggy/Ramones/Clash inspired names - plus basses and acoustic guitars, also drums and cymbals and they just started an effects boutique line. I will keep an eye on this company because I'm sure that they will keep releasing new cool stuff and one day I will want some of it...
Bertram