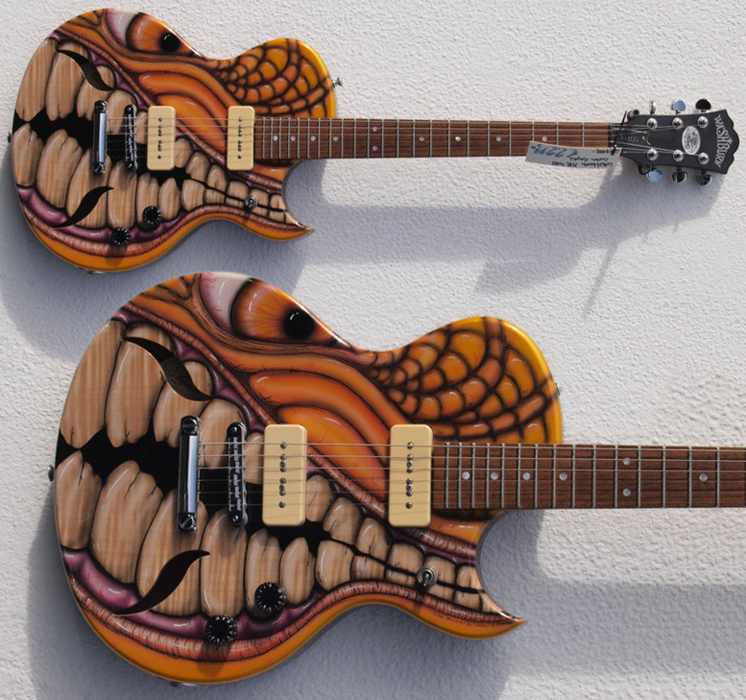 Usually I loathe this kind of paint jobs, the easy and intruding horror comics/graffiti style that reduces everything it touches into pathetic boyish machismo. But I must say that in the case of this Washburn MR-400 it's surprisingly good, with this close-up framing that turns the image into a quasi -abstract pattern - it's unusually intelligent for this kind of things, and gives it an enjoyable second degree.

On top of this, the guitar is quite cool I must say. As far as I understood, the Washburn MR series models are Sammy Hagar signatures - the 400 being the P90s version - and look like thinline wider LPs with strangely shaped and placed soundholes - a very nice touch, mostly combined with the florentine cutaway. The paint job comes from Washburn's custom shop.

I have problems understanding Washburn's policy: it's an old company that has been there for ever and that could claim to belong to the holy ancients, but they seem to keep low profile, for example they don't keep archives of their discontinued models - and they've had prestigious users like Brian May or Roger Waters who even had a signature model (not to mention Paul Stanley, but who can still think that KISS is attractive?) - and don't try to claim a 'cult' status like many of their competitors on the guitar market... They have original though classic designs, also innovative technology, but their catalogue is full of LPs clones and superstrats... I have a good feeling though about their products, but it's a blur impression really not based on how they communicate about themselves!