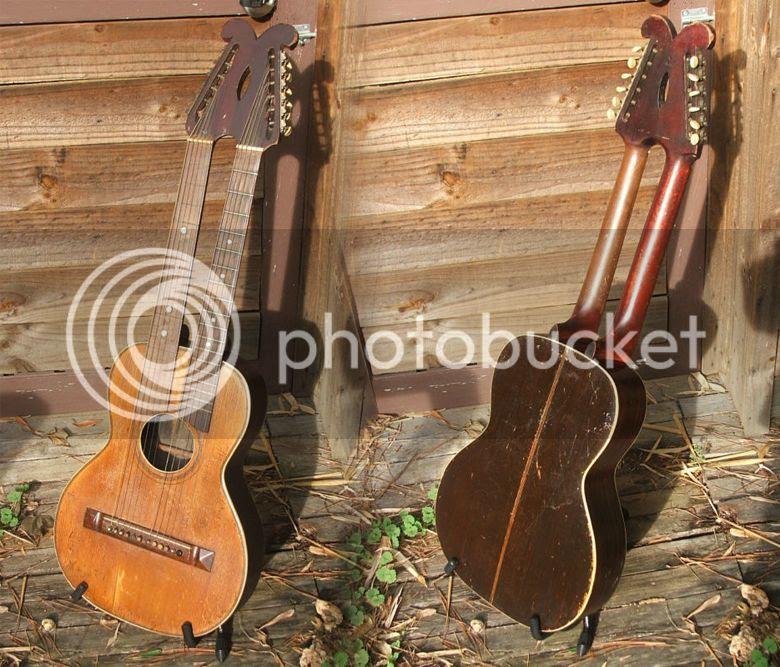 This Stella doubleneck harp guitar was made in Jersey City, New Jersey, in the 1920s by the Oscar Schmidt Company. Stella was the brand name used on the budget-priced line of instruments, but having found favour with many a blues musician over the years, the Stella brand is now highly collectable and vintage examples now sell for prices that are far from the "budget-priced" label.

It's also interesting to note that an instrument such as a harp guitar, which nowadays would be regarded as a highly specialised form of guitar, was in the early years of the 20th Century considered popular enough to warrant the existence of a budget line model.

Harp guitars come in many shapes and forms as even the briefest of glances through the fascinating www.harpguitars.net website will show you. This Stella example appears to be a double-necked guitar, but the contra-bass strings on the upper neck - which you'll notice has been left fretless - are only intended to be played as open strings. In fact, the necks are mounted too closely together to allow conventional playing on the upper neck, and this is another visual clue that the left hand is not required on the upper neck.

This guitar is currently listed on eBay with a Buy It Now price of $3,499.