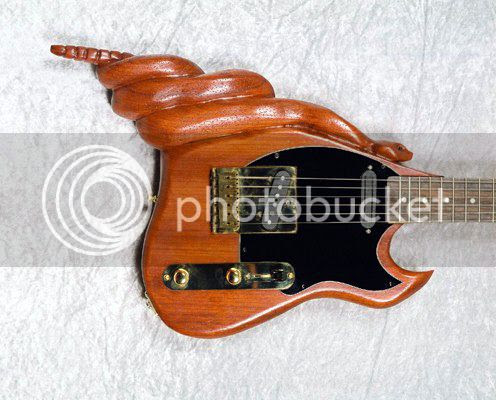 "THIS IS THE ONLY ONE IN THE WORLD!" screams the eBay listing for this very ugly hand-carved guitar.

Some of us would respond that such scarcity could be considered to be something in its favour.

The strange carved object on this guitar, at closer inspection, reveals itself to be a rattlesnake, but unfortunately from further away it does resemble something that comes out of the rear end of a dog. I'm sorry, the last thing I want to do on this blog is to get all scatalogical and severely lower the tone, but with a guitar like this it is very hard to avoid saying something along those lines.

The carving doesn't work for me, because if that is supposed to be a snake, then what is it meant to be sitting on? A severely sawn-up Telecaster?

Nice try - someone probably put a great deal of effort into this creation - but design-wise it just does not work.

Currently being offered for sale on eBay UK with a Buy It Now price of a staggering £999. (Cough, splutter, choke...)

Thanks (if that is the word I'm looking for) to Alan Newton for bringing this guitar to my attention.