Weird Telecaster with tuners in body and modular pickup system 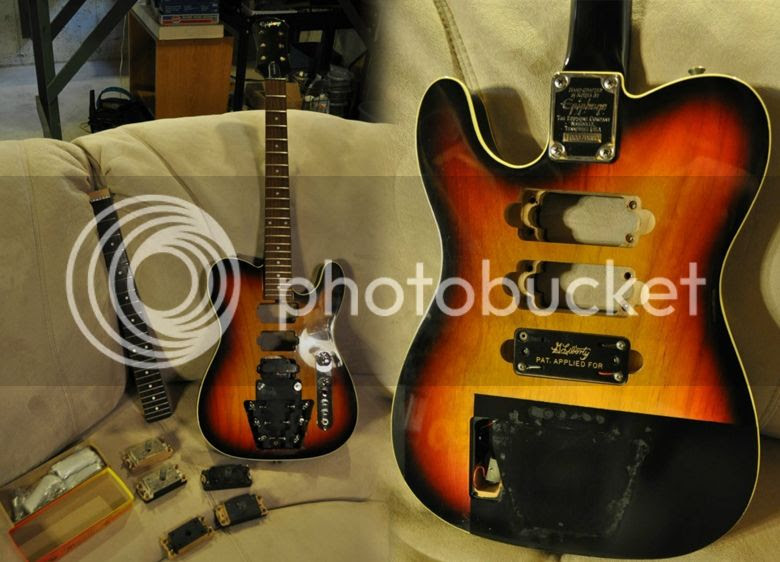 Let me quote from the eBay listing for this guitar:


This listing is for a funky Telecaster project that I have had sitting around for about a year now. It is a 80s era telecaster body from SF guitar works. It has the name stamped in the neck pocket. The body has been HEAVILY modified to have 3 removable pickups. The tuning keys were also set into the body where the bridge would go. The pickups snap into the guitar from the backside and could be put in any position. They could also be inserted in reverse so I guess that would change the polarity? The power is routed to the pickups via 4 banana plugs which also hold them into the body.
[...]
The tuners set into the body are Gotoh style (might be the real thing but am not sure) and the bridge is a 80's era Gibson tune-o-matic. The neck that is on it is a 97 Epiphone Korean made LP 100 neck that I had sitting around. I worked on it a little to fit into the body which it fits very nice but it seems to sit a little high in the pocket. It does not have the tuning keys on it as I had a different plan for the headstock and didn't need them. I also used the Epiphone mounting screws and neckplate to mount the neck. I am also going to include the funky neck that was on it. It is definately a tele or strat style neck but the headstock is cut off and it is modified to have the string ends up there instead of the body (remember the set in tuners in the body?). It has a rosewood fret board and very nice frets. It is older but I have no idea who made it though. I am going to include the pickups that came with the guitar and a set of brand new hot rails from GFS too. The pick ups are 3 strat style single coils (no idea who made them), a EMG single coil, a Seymour Duncan Humbucker (No idea of the model but it is USA made), a "mystery" humbucker (could be another SD but it is not marked although it is nice quality) and 3 Guitar Fetish hot rail strat pickups. All the pickups work and have enough wire to add them to the "cartridges" that hold them into the body. The pickup holders are made with the name "G Liberty" and "pat applied for" but I have not found any info on this person or design. Obviously they were CNC made (as were all the body mods for that matter) There are 6 of them and are made out of hardwood (Maple?) except for one which looks like pine. (Prototype maybe?) They also have a spring in the middle to adjust the pickup height. There is really so much unknown about this guitar really but whoever "G Liberty" is they were pretty crafty and innovative...

Indeed, it's an intriguing guitar. I do wonder about the validity of mounting an Epiphone neck (very likely intended for a 24 3/4" scale length) onto a Fender type body (designed for a 25 1/2" scale); the intonation implications could well be hideous. I've also seen these rear-mounted pickup systems before, usually used as "testbed" guitars by luthiers or pickup manufacturers. 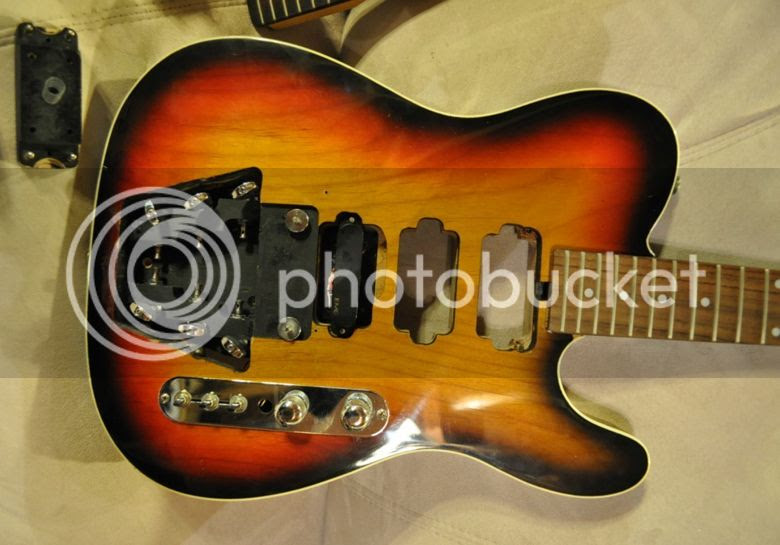 Currently being auctioned on eBay.