The SMASH guitar by K's JAPAN, built to be trashed and then recycled 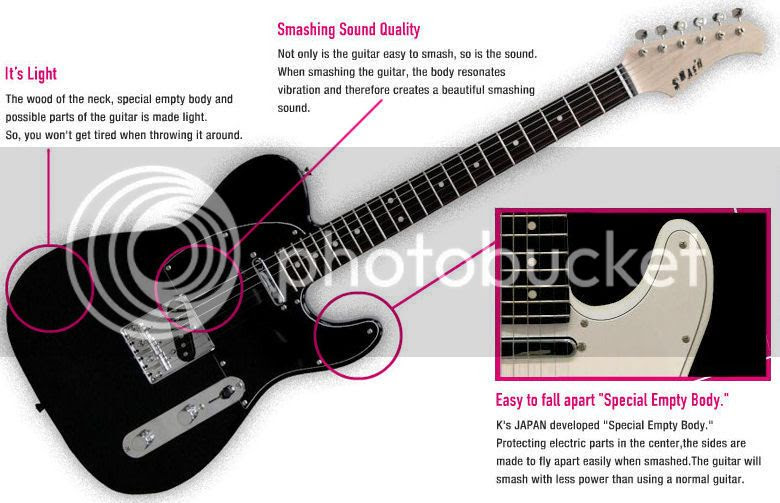 Regular Guitarz readers will remember my diatribe against smashing guitars on this post about Nine Inch Nails selling their old used - and sometimes abused - gear on eBay. The main thrust of my argument was that it is such a tired old cliché and surely after all these years bands can come up something more original by way of on-stage spectacle.

However, it seems a few lines of text on a guitar blog is not going to change the world, and such destruction in the name of music is not going to go away. As one commenter noted, each new generation finds it thrilling and exciting and they don't care less about what Pete Townshend got up to in prehistoric times.

And now from Japan (where else?) comes a range of guitars that are actually designed to be destroyed. The SMASH guitar presented by K's Japan is priced at 5000 Yen (less than $60) and whilst it resembles a Fender guitar, it has a lightweight hollowed-out body that should smash quite easily and dramatically.

Once you've smashed your guitar and amazed and wowed your audience with your shocking, if unoriginal, act of destruction, you have the option of returning the resultant debris to the manufacturer who will use all salvagable parts to make new guitars and donate them to orphanages in the Philippines. This is the recycling part of the equation. Alternatively K's JAPAN offer a custom re-building option so you can do it all again. Unless this re-build is significantly less than the original 5000 Yen purchase price, it might just be easier to buy a new one.

Other options include a SMASH amplifier to smash your SMASH guitar against (I expect it falls to pieces quite easily and spectacularly), a "pick bomb" (guitar picks fly out of the guitar in all directions when it is smashed), and a SMASH Visualizer chip embedded into the guitar "to visually show the movement and collision of the guitar on to [a] screen".

Potential smashers should be aware that they need to sign a liability form before being allowed to purchase this product, and should be aware of the small print that says:

"This product is conceptual based on rock spirit. It is not created to suggest act of violence. K's Japan will not be responsible for any kind of damage it may cause when using Smash at your own risk."

Thanks to Pelle for bringing this interesting product to my attention (via crunchgear.com).

NB: Please make sure you are reading this Guitarz post at guitarz.blogspot.com and not on a Scraper blog that copies posts without permission (and steals bandwidth) so as to profit from advertising. Please support original bloggers!
Posted by Gavin Lloyd Wilson at 11:41 am