Strat that thinks its a Tele 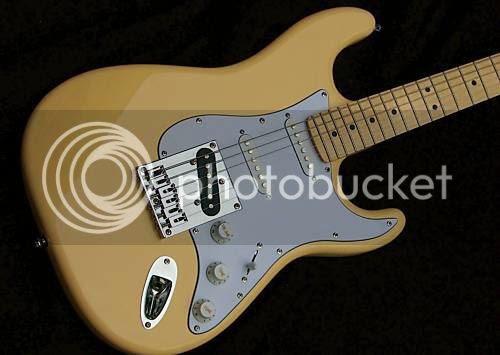 Even if they are regarded in many circles as highly unoriginal, I am still a fan of the all pervading Stratocaster and I don't care who wants to moan about them. It's a pity really that the design has been diluted and trivialised by so many (often mediocre) copies. Is it any wonder that the likes of Rickenbacker are so aggressive in their opposition to look-a-likes and counterfeits, when you see that the designs of Fender have effectively become public domain?

The one thing, however, that I have never liked about the Fender Strat is the one feature that many love it for. The tremolo. Personally, I've always found it a complete waste of time. Perhaps I never developed a good tremolo playing technique, but all it ever did for me was to send the guitar out of tune. And so, with every Strat I've had I take the trem arm off and either leave it in the guitar case or else lose it.

The idea of a hardtail Strat has always appealed to me. I'd love to try one out and compare it to my trem-equipped Strats, because even though I remove the arm, of course the trem block and springs are always present and correct. Some would argue, and rightfully so, that the springs in the back of the Strat contribute to its distinctive sound; they act like a built-in spring reverb. I appreciate this fully, but still the idea of a proper hardtail Strat continues to appeal to me.

Could the Haywire Stratotelia pictured here (currently for sale on eBay) be the ultimate hardtail Strat? It has through-body stringing and uses a Telecaster bridge with its larger footprint for increased sustain and a Telecaster-style bridge pickup. It would be interesting to see if indeed it plays like a hybrid Tele/Strat. (Previously the only hybrid Tele/Strat I've seen have had Tele-style bodies with a Strat's hardware. I never could see the point. Surely, that's just a Strat with the upper horn lopped off?)

The neck is by Warmoth (and as such is Fender licensed) and Haywire claim that the guitar has the ability to accommodate either 25-1/2" (Fender) or a 24-3/4 (Gibson) scale neck with no body or neck modifications. So you could have yourself a Strat/Tele/Gibson hybrid too. They also offer a choice of Strat or Tele headstocks.

It's a quality instrument, but with a base price of $1750.00, some might not like having a relatively unknown brandname on the headstock.