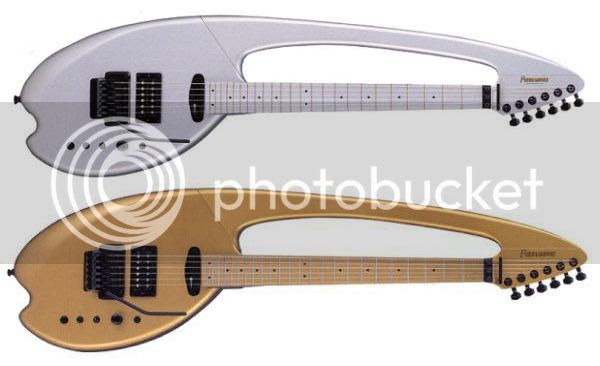 I don't know if you'll believe me that it's possible, but it would seem that the Japanese are even more crazy about the guitar than we are in the West. They have long had guitar models that simply do not see the light of day outside of Japan. Just take a look at some Japanese guitar websites - you'll see all sorts of guitars that you've never laid eyes on before.

The Fernandes Hisashi Imai signature guitar features their own Sustainer system and a stabilizer bar similar to that found on the Roland GR-707 guitar synthesizer controller of the 1980s. With the GR-707 the bar supposedly kept the neck rock steady and allowed for accurate tracking of the strings. I'm wondering if the bar on this Fernandes maybe performs a similar function and improves performance of the sustainer? But the cynic in me doubts it; I reckon it's just there for aesthetics.

Hisashi Imai is guitarist of Japanese rock band Buck Tick who formed in 1984, and are founders of the Japanese musical movement known as Visual Kei, a style of music characterized by the use of make-up, elaborate hair styles and flamboyant costumes (and which sounds like the 1980s never ended for some). I suppose it figures that such a band would use flamboyant looking guitars too.