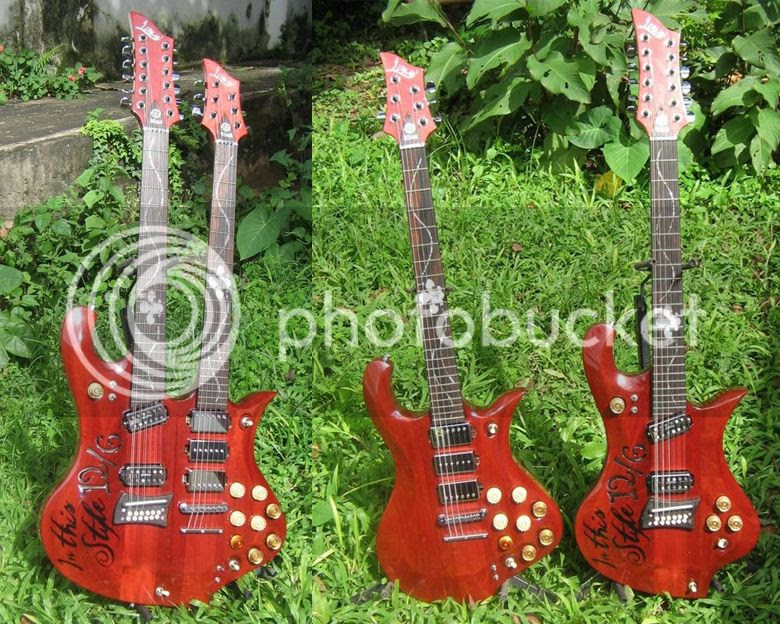 Doublenecks always look impressive on stage and are a sure temptation to any guitarist afflicted with GAS (Guitar Aquisition Syndrome), but in use they can be quite cumbersome and unwieldy.

If you've got to have a doubleneck the best option would be to have a modular instrument that can be split into two individual single-necked guitars when desired. That way you have two guitars for the studio and a doubleneck for live performances.

The guitar(s) pictured here belong(s) to Guitarz reader Tiago Sarmento from Brazil. Here's what he has to say about it/them [note: a modular doubleneck plays merry havoc with semantics - is it a single object or two?]... Anyway:

Mahogany body with two (now you can help me in english terms) ipê-tobacco stringers. Is that the right term, with those stripes on the back with different woods? Anyway, ipê is a national tree from Brazil, and it adds sort of a higher vibrations to compensate the dense mahogany body. The neck is brazilian rosewood.

The 12 string part has a "12/6" F-hole. Is that after the Mad Hatter sign on his top hat, since I'm a big fan of Alice in Wonderland book. In the book, the hat says "10/6", but I added a "poetic license" there and put the 12 instead. Quite obviously why. The "In this style" adhesive - was supposed to be a pirograph - is complementary to the tag on Hatter's hat.

The inlay is slightly different from the 6 strings part, and has tha Fleur-de-Lis and a roman numeral "II" in mother-of-pearl and the branches in abalone. The pickups are a custom made from Brazil called Stelfner and they are built after the burstbuckers. It has a piezo pick up. The mini toggles are on for the piezzo (position 1= only piezzo; 2= piezzo plus electric and 3= only electric). The f-hole has a blue led light inside, and looks quite psychedelic in the dark. The second mini-toggle splits the pick ups into single.

The 6 string is quite the same, but when they're together, the lower part controls all the electronics. So it has 9 knobs. Each different so it facilitates the know which is which. The leds now are blue and likewise the 12, is on the top of each knob and on the scale, side-by-side with those white dots. The pick ups here are all gibson: 490t, p-94 and busrtbucker II. Mini toggles works the same way.

Each, of course, has its complementary parts. The luthier signs as KIAN GUITARS and these is my personal brand, Lizzie. In the back of the headstock there's a drawing. 12 = a mad hatter caricature and the 6 of mine, in a artistic design similar to my project's logo. 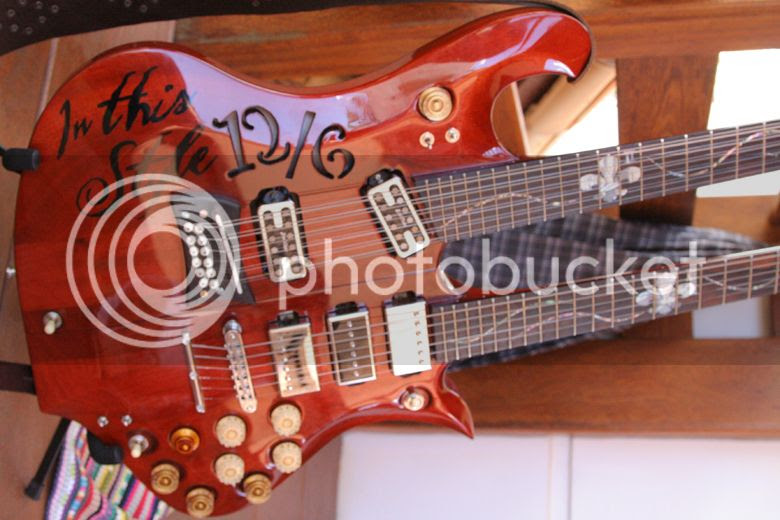 I've not edited the above because I'd prefer to leave it in Tiago's voice, as it were. However, I think it's all quite clear what he's talking about, and I'd like to thank him for sharing this with us.

Keep those interesting pictures and stories of your guitars coming in, guys!

NB: Please make sure you are reading this Guitarz post at guitarz.blogspot.com and not on a Scraper blog that copies posts without permission (and steals bandwidth) so as to profit from advertising. Please support original bloggers!
Posted by Gavin Lloyd Wilson at 10:45 am