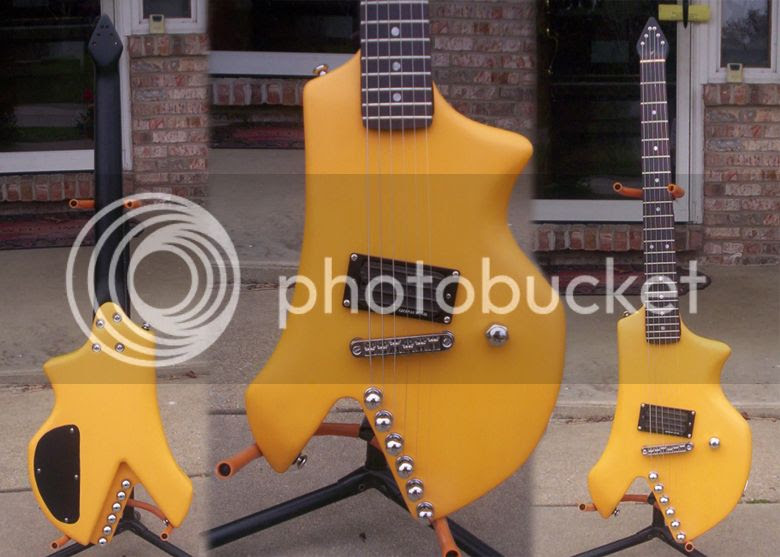 We recently looked at a Danelectro-inspired guitar built by Guitarz reader John McGee. He hinted that there was more where that came from, and as good as his word, has sent us photos and details of a guitar he based on one of the lesser-known models from one of the guitar giants, the Gibson Corvus. I'll let John explain in his own words:

Here's a Corvus I made last year. I know the Corvus is something Gibson would rather forget, but I loved them then and I love them now.

The original was unbalanced (there's a shocker - a poorly balanced Gibson!), so I lopped off the headstock. That cleared everything right up. Steinberger tuners made it all possible. I also modified the contouring to suit my tastes. It now balances very nicely and is REALLY light and comfortable. It's one of my favorite guitars to play.

The body is poplar, the neck is maple/rosewood. The pickup is a Kramer quad-rail, coming in at around 15K.

The only regret I have is the color. It kinda looks like an upside-down whale with teeth, or a Goldfish cracker. Then again, that only adds to the silliness of the whole thing.

Thanks again for that, John! We always enjoy seeing one-offs and self-builds here at Guitarz. It's interesting to see a lesser-known guitar like the Gibson Corvus used as inspiration. The shape of the body could have been originally designed to have the tuners located where you put them!

Guitarz - The Original Guitar Blog - now in its 9th year!
Posted by Gavin Lloyd Wilson at 12:15 am