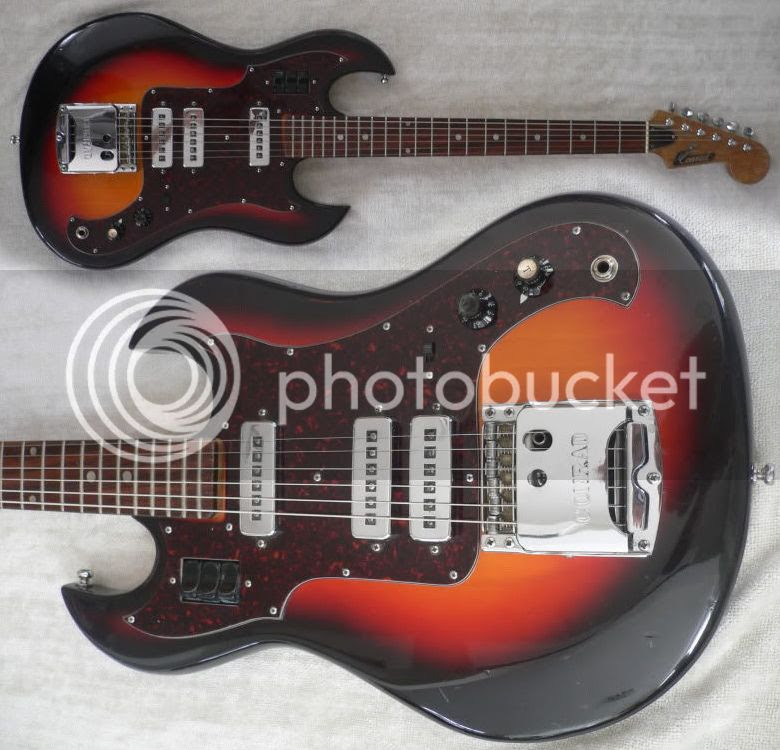 Here's another vintaqe Japanese-made oddity for your. It's a Conrad Bison, and according to the seller it is a baritone model having a longer scale (although it's not too obvious in the photos - I'm not 100% convinced about this).

If it IS indeed a longer scale guitar, possibly it should more accurately be labelled a Bass-VI. As many of you will know, Fender, Danelectro and various other companies jumping on the bandwaggon produced these six-string basses in the 1960s. They were basically 6-string guitars with longer scale-lengths and tuned like a guitar, E to e, but down an octave. String spacing was as a guitar and they were often equipped with tremolo arms.

In more recent years people have taken to calling these "baritone guitars" so as to distinguish them from the more modern vision of the 6-string bass with low B-string and high C-string. But this, for me at least, causes another problem because it then confuses the Bass-VI with the modern baritone guitar which uses a tuning somewhere between a guitar and a bass (tunings vary), whereas the original Bass-VI guitars went down as low as a 4-string bass but added two higher strings.

Sure, some players took the Bass-VI and tuned it in ways more akin to our modern baritone guitar, but that is not how these instruments were envisioned.

Anyway, don't you think the shape of this Conrad with its offset pointed horns reminds you of the "Unknown" 12-string we looked at recently? (Which was, we decided, most likely an Arai/Aria Diamond or similar). From what I can find out, Conrad was indeed a related brandname for these same instruments, probably used by a certain store as its in-house brand.

Guitarz - The Original Guitar Blog - now in its 9th year!
Posted by Gavin Lloyd Wilson at 11:33 am