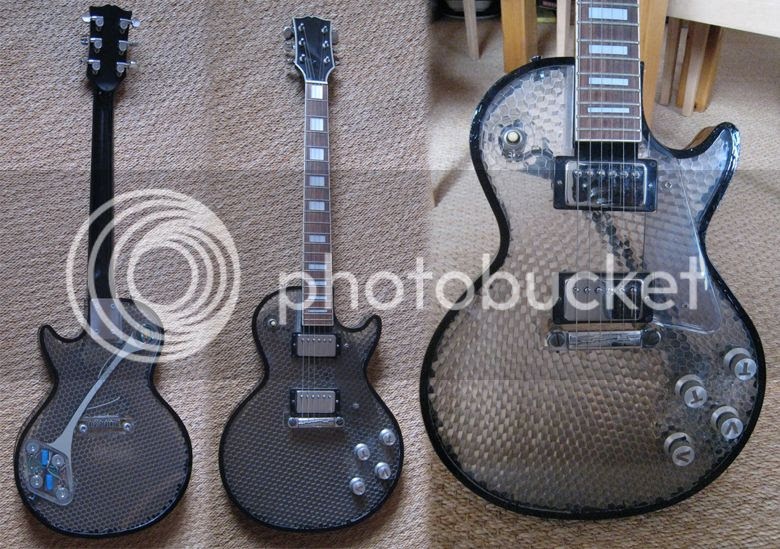 Perspex-bodied guitars are always a real head-turner, but are not quite such an unusual sight these days. Regular readers will know that I'm quite a fan, having owned three over the years. Here's a unique LP-styled guitar from the 1970s that provides an interesting varition on the see-thru guitar theme.

I'll let the seller explain about this guitar and shall quote from the eBay listing:


It was built in London in 1970 by Alexander and Gordon (long gone) - commissioned by me as a one-off. The body is fabricated from perspex (plexiglas) and aluminium honeycomb (from an aircraft wing - fabulous shimmer under lights) and is very strong, with great sustain - perspex is known for it (cf Dan Armstrong etc). It has a combination stop tail/bridge with really sturdy steel posts embedded in a block of solid perspex inside the body - a deliberate design choice for maximum sustain. The stop/tail is the original one when built and was supplied as Gibson, but doesn't have any marks.

This beauty has a pair of genuine Gibson 1970 humbuckers that were brand new at the time and came over from Kalamazoo as a special order, wrapped in tissue paper, via a Gibson dealer in Denmark Street. Those original factory humbuckers were near-impossible to get back then, as Gibson in those days would only release them as spares to their own dealers, and even then only in exchange for broken or damaged parts. You can still see fragments of the old black transfer label on the back of the pickups, through the honeycomb. The pickups have never been taken out since the guitar was built.

It has been played occasionally (but not recorded) by, among others, Robbie Robertson of The Band, Greg Lake of Emerson Lake and Palmer, Mickie Most, Robert Stigwood and others. I also jammed around with people like Mick Taylor of the Stones, Steve Thompson (John Mayall's Bluesbreakers), Ted Turner (Wishbone Ash), etc in those days and it would probably have been in their hands at one time or another.