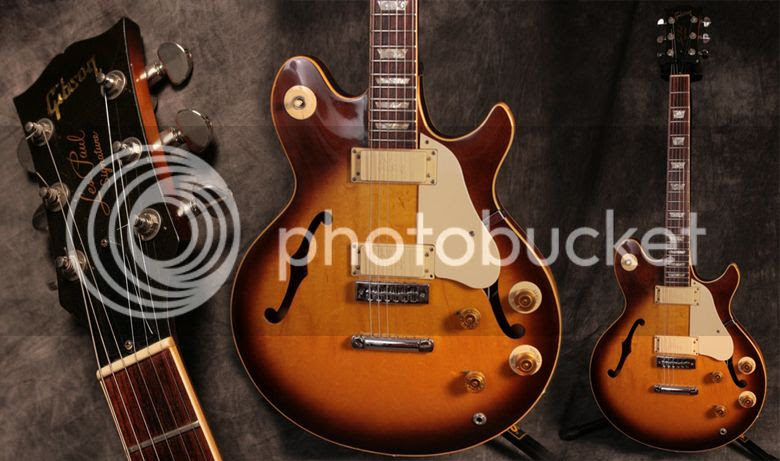 Here's another Les Paul, and one of my own personal favourites - but you know me - it most probably appeals because within the sphere of Les Pauls its a bit of an oddity. Looking for all the world like a hybrid  a Gibson 335/Les Paul, the Gibson Les Paul Signature - produced between 1973 and 1978 - is a semi-hollowbody guitar. Now, some would say a semi-hollowbody Les Paul was an oxymoron because a Les Paul by definition should be a solidbody guitar. I think it's this breaking the rules attitude that appeals to me. However, it could have been even more bizarre. I seem to remember seeing pictured in a guitar book many years ago, a Gibson Les Paul Jumbo acoustic guitar with cutaway and pickup (single, I think). Now surely that couldn't be further away from the Les Paul ethos? (And I need to find a picture of one of these!)

The Signature differs also in that its controls consist of volume, treble tone, midrange tone, and in/out phase switch, and it has two output jack sockets - high-impedance on the guitar's top, and low-impedance for recording on the rim.

Most Gibson Les Paul Signatures were finished as gold tops - this is one of the rarer sunburst models, of which there were only 84 produced, and this example is currently being offered for sale on eBay with a Buy It Now price of £2,995.