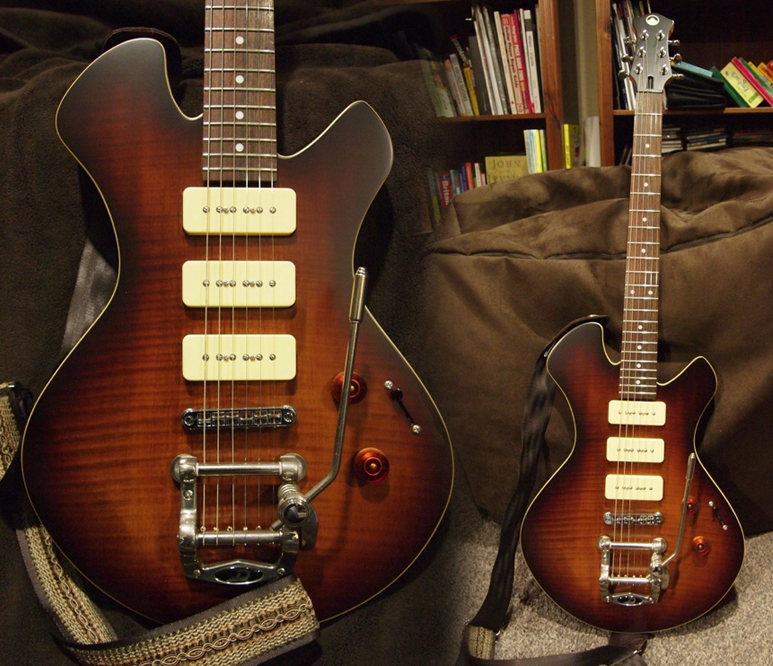 I'm always attracted by guitars trying to escape usual designs, even if the result is not completely satisfactory - as it is the case with this Taranaki P-style. I understand that the big horns are meant to regain the material lost with the very deep curves, or even increase some very localized vibrations (I couldn't find any technical description for this body but I've found some luthiers documentation describing extensively how the vibrations travel in the body and how horns can have a strong influence).
Actualy there is almost nothing about the Taranaki guitars, there is no proper website but a distribution company one where Taranaki is actually not mentioned - it seems that the guitar being unsuccessful provoked the fall of the company, because they were released in 2008 and announced to be widely distributed and in 2010 there are no traces of them... Anyway, I gathered that the Taranakis were conceived in Germany and made in Korea, that there are two models - this P-style with three P-90 pickups, and another one with humbuckers, that they use high end gear, and I saw different finishes - a couple transparent colours on flamed maple tops and plain white...
So yes aesthetically it's a kind of failure, but this demo reveals a pretty nice sound...

If anybody has more information about this guitar, it's welcome, I'm quite curious about it...
Bertram


Guitarz - The Original Guitar Blog - now in its 9th year!
Posted by bertram at 4:14 am