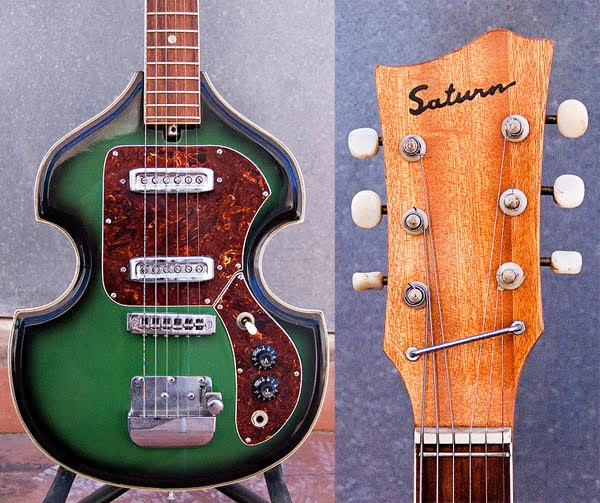 After Gavin's post of the Guyatone Saturn, this is my Kawai Saturn Violin shaped guitar which I picked up on eBay about four years ago for the princely sum of £149, which may have also been made by Guyatone. It seems it was made for just one year during 1968 then discontinued. I'm sure it's the same story for many "odd" guitars from this period. I've mentioned this before and it's hard to believe but the guitar industry was in decline at the end of the 60s and there were a lot of novelty instruments produced to try and catch the imagination of buyers. I guess, if they didn't sell, they were discontinued pretty sharply.

The logo is raised but is under the varnish - some kind of raised print, I guess - the one in the CrazyDave video (see below) has no logo so I supposed they were pretty slap-dash with some of the details and may have also made them under a different name for other distributers. Mine is in great condition and has hardly a mark on it. It's all original except I changed the pickups for some NOS ones from eBay. The originals were quite corroded and although they sounded fine, the NOS ones just look that bit better. Like many cheap pick ups from this time, they are quite microphonic but not distractingly so.

They only thing that's suffered over the years is the tremolo arm. The thread has stripped completely and now I use a slightly bigger nut to fill the old hole. Despite being a real cheapie, this guitar has a neck as straight as a die, a great action and even after some pretty strenuous wanging, it stays in tune.

The Presidents of The United States of America (the band not the wikileaks fearing politicians) used (ABUSED or TRASHED to be more accurate) one in their official video for their one and only hit "Lump" . After what they did to it, I guess there's one less Saturn in the world today. [Errrrmmm... David, you may want to read the comments - Chris Ballew of the Presidents said he loved that guitar and never abused it. - G L Wilson]

For a slightly more respectful video go and see CrazyDave play his. Not me, the other crazy Dave. Yeah Dave. Crazy man! Yeah!

There are scans of a 1968 catalogue from the Canadian company Eatons (as Gavin mentioned the other day) at http://www.vintaxe.com but you have to pay to see them. I did manage to get access to them a while ago (I guess there site was having problems) and was disappointed to find it didn't include my guitar. Actually I checked them this morning and they didn't include Gavin's find either. I put pics of the covers in the comments so you can get an idea of their overall cheesiness. 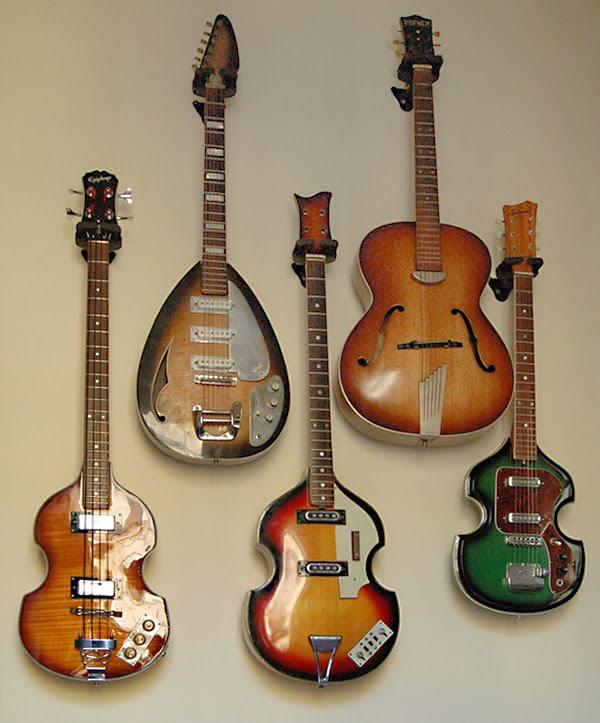 By the way, the second picture is the wall in my studio. I am rather fond of violin (or viola to be pedantic) shaped guitars. The Epiphone is new. Compared to the boxy-ness of the Univox it's a little dull but, with tape wound strings and using the neck pickup, it has a satisfying thump and a beefy ooomph that almost gets you into sub bass land. Which is why I wanted it. The Univox was a dog when I got it. I had to ditch the neck as it was seriously warped and the truss rod was broken and I've since replaced it with a NOS Hofner bass neck and extra light wound strings. A VERY different "twangier" sound than the Epiphone.

Guitarz - The Original Guitar Blog - now in its 9th year!
Posted by battaolo at 10:57 pm