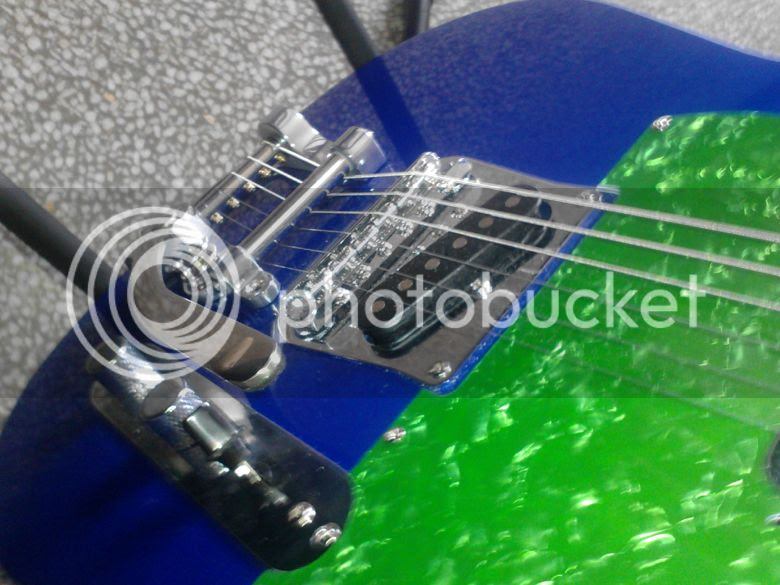 
My elder son Thomas has been playing bass and guitar for about three months - we got him a bass and amp for Christmas, and he's been using my old Squier Affinity Series Telecaster through a little Orange Micro Crush amp as well. His 13th birthday is coming up, and my wife and I decided to get him a (low-priced) six-string of his choice. Like me, he isn't keen on Strats, but he wanted something with a trem. Initially he wanted an Bigsby-equipped Epiphone Wildkat, but these are now impossible to get - I think they've been discontinued. Then, while browsing on Ebay one evening we found a Bigsby kit for a Telecaster, and a plan began to form. Thomas would get a unique customised Tele.

We bought a new Squier Affinity Tele - metallic blue - from Thomann. Unlike my old through-body Daphne Blue one, this one has a maple fingerboard and a top-load bridge, the latter of which suited our project perfectly. We also bought an emerald-green pearloid scratchplate for £10 on Ebay (Thomas' choice - not mine!). My wife and I were a bit apprehensive about a cobalt-blue guitar with a bright green scratchplate, but it does grow on you, and it looks very smart. Plus it's probably the only one like it in the world! We got our local guitar shop (Twang Guitars in Penge, London SE20 - gratuitous plug!) to order and install a Bigsby Licensed trem and bridge unit (£120 plus £25 lutherie, paid for by Grandpa), and two weeks and just over £300 later Thomas has a one-of-a-kind Telecaster that looks like something from the Fender Custom Shop but cost 10% of the real thing. He chose the specifications himself, and the guitar looks and plays like a dream. I'm almost jealous...

This illustrates beautifully the brilliance behind Leo Fender's designs for guitars like the Stratocaster, the Telecaster, and Precision and Jazz Basses. That is, you can take a screwdriver to it and swap and change parts so very easily. And of course, the whole concept behind the bolt-on neck was that it could be changed easily should it become worn out.