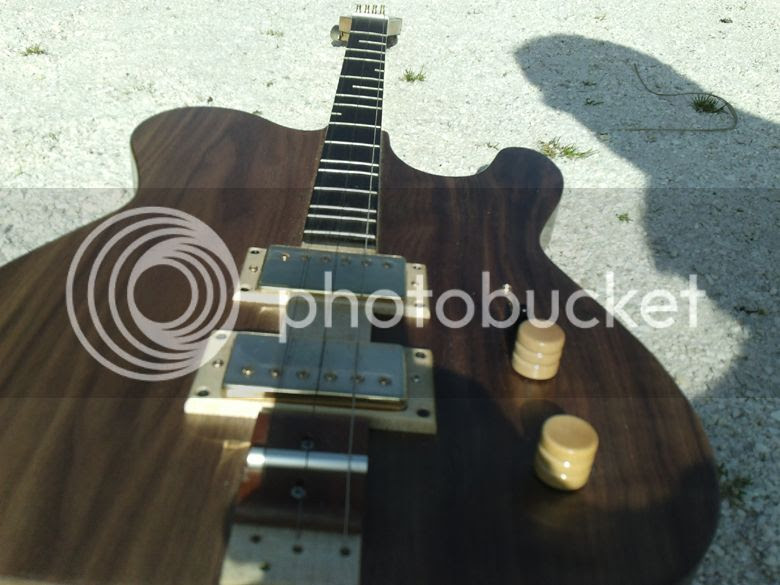 
Here are some pics from my friend's "dulcicaster"; it's a mix between a dulcimer and a classic Telecaster body. You play it on your lap. You'll notice that it's got 4 tuning pegs but only 3 strings on it. My friend and fellow musician Dominique Duxin decided NOT to use a double center string like on the traditional dulcimer but a single one so, if he changes his mind, he can go back to the usual tuning. The instrument is usually tuned D,A,D or E,A,E but many other alternate tunings are possible. It has been made by Guy Oudenot, luthier at Saint Brieuc. To my opinion the choice of these pickups (Gibson) is not very good because the polepieces don't and can't match the strings causing a lack of power and thus noise when you push the gain on the amp. A "rail" pickup should be much more adapted. Besides, notice the frets; dulcimer is a modal instrument on which you cannot usually play all notes. Dominique had some "semifrets" added in order to be able to play not only traditional. In fact he plays very electric. Check that on our blog. We are a strange trio playing many different instruments. The Dulcicaster sounds more harsh and trebly than an electric guitar but that's what we were after. I hope that this pleases you and can inspire other players.

Thanks for showing us this unique instrument, Harve. I'm not so sure that the choice of pickups would be that big a problem. Many electric guitars have pickups with polepieces that do no align correctly beneath the strings. I don't think it's as important as people seem to think it is. But I agree that a rail pickup would have been more visually pleasing, or perhaps some lipstick tubes?