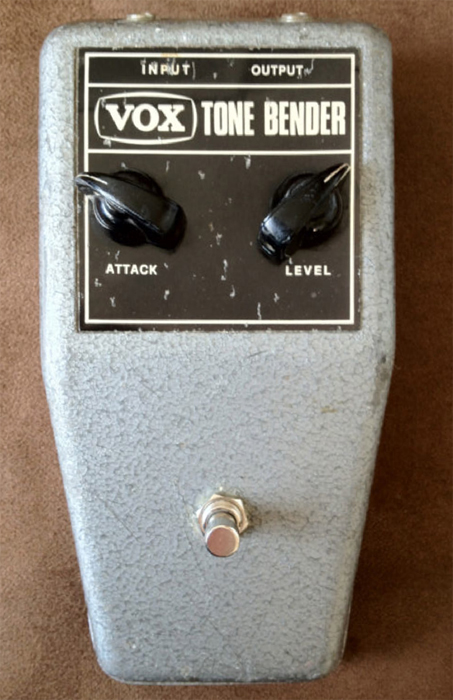 Another great vintage fuzz pedal (yes, I'm quite into pedals lately, and mostly in fuzz boxes), the Vox Tone Bender.
Even more than in the field of  early electric guitars, the dawn of effect pedal is both full of myths and poorly documented - though everybody has an opinion about everything it seems. Who came first, what are the original components and circuits, what is the genuine sound?

And people who possess original pedals are of course reluctant to tear them apart to check what's inside - as you can see here (and you can read the whole Fuzz Central website while you're at it) early circuits were protected by a layer of paint...

And also makers had no reason to be consistent in their buildings, there were no standards, everybody was experimenting with new sounds (is it a legend or the Kinks really recorded 'You really got me' after slicing the speakers of their amps to get their infamous fuzzy sound?)

Anyway, I've been reading many things about the Tone Bender - sometimes contradictory - so this is my version of the facts: the Vox Tone Bender was built in Italy - like Vox's guitars - by a company  called Jen, using the Tone Bender circuit provided by Sola Sound to several companies for their pedals, such as Marshall or Rotosound.

The original Vox Tone Bender was based on the MKI.V - the second version of the circuit - but there's been several later versions of both the circuit and the pedal, but since this one doesn't sport any indication, I assume it's an early model, said to have inspired the Fuzz Face.