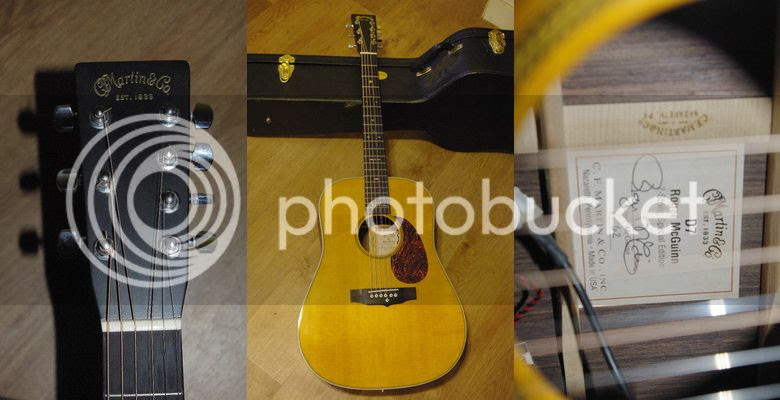 Here we see a Martin model D7, which sadly is now a discontinued model. I say sadly, because it is one of the best ideas - dare I say innovations? - for acoustic guitar to have come along in decades, and like all the very best ideas it is so simple. A signature guitar for Byrds guitarist Roger McGuinn, the D7 aims to capture part of his signature 12-string sound but without the hassle of having a full set of twelve strings. The seventh string is an octave G string which is paired with the regular G string, so this guitar still has six courses and doesn't require any mental adjustments when playing.

The eBay seller tells us that:


Roger McGuinn describes this as 'the Swiss army knife of guitars'. It can be strummed, picked, flat picked and has nearly all the zing of a 12 string but the convenience of a 6 string. When finger picked the 7th G string isn't even noticed but when strummed or flat picked it sings out beautifully.

Indeed, this guitar was the inspiration for my own 8-string guitar conversion which we looked at recently and which is still playing very nicely - the top hasn't imploded with the extra string tension ... yet!. My original idea was to convert my (cheap) acoustic into a 7-string like the Roger McGuinn guitar, but I started thinking, "If seven strings sound so good, then what will eight strings sound like?" and ending up drilling extra holes in the head and bridge to accommodate an octave D string.

This above pictured Martin D7 is currently listed on eBay UK with a starting price of £1,299 and a Buy It Now price of £1,825. Bear in mind, before the guitar was discontinued the new price was £2,250.

That is a lot of money, but then this is a quality guitar from C.F. Martin. If you wanted a similar 7-string (or 8-string) guitar, then there's always the Do It Yourself route similar to the one I took, or if you don't want to go drilling holes in your favourite acoustic guitar there is this really neat conversion kit from Netherlands-based AddString which adds an octave G-string to your guitar without any modifications other than filing a extra slot in the nut (and the tool for that is provided in the kit). 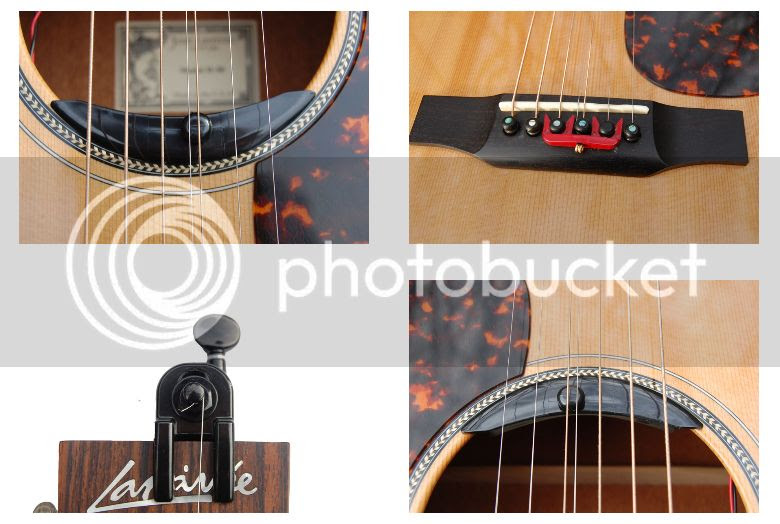 One very crafty feature is the ability to switch between 6-string and 7-string modes using a string catch mounted in the soundhole. The AddString kit is available now at a special introductory price of $95.