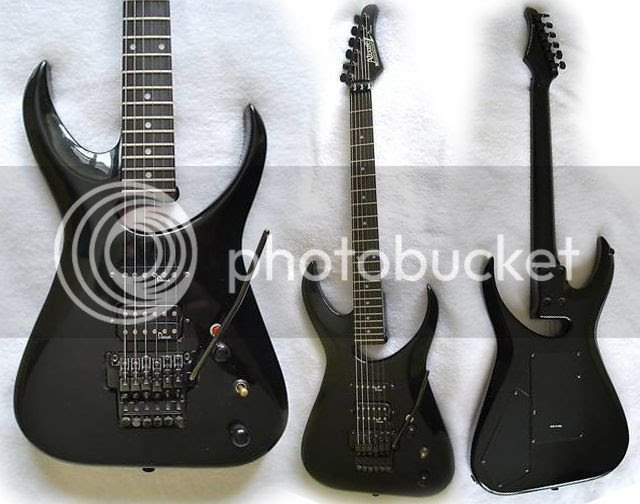 I was beginning to think I'd dreamt this guitar years ago, because I've been trying to find a photo of one for years to put on this blog and could not find a trace of it. OK, it would have helped if I could have remembered the name of the instrument. I had it in mind it was something like an Aria; it seems that I got the initial letter correct, for it's an Alvarez Dana Scoop with a Modulus graphite neck, and was a model made between 1992 and 1995.

At the time this design was being hailed as the next big innovation in the world of guitars. And then it was never heard of again.

The lower cutaway of this could be described as extreme. The "scoop" cutaway actually extends beneath the strings at the top of the neck. (No room for a neck pickup, you'll notice.) It supposedly enhances the guitar's sustain and resonance properties, and eliminated phase cancellation between the neck and body resonance.

Personally, I would have thought a lot of those qualities could have been enhanced by the use of a graphite neck, rather than the eccentric body design.

I'd like to know where these guitars have been since the mid 1990s? Were they so embarrassing in appearance that they were hidden away never to be seen again?

NB: There are a lot of blogs STEALING content and bandwidth. If you read this anywhere else but on guitarz.blogspot.com then you are reading a blog that STEALS content. Please support original bloggers!
Posted by Gavin Lloyd Wilson at 4:10 pm