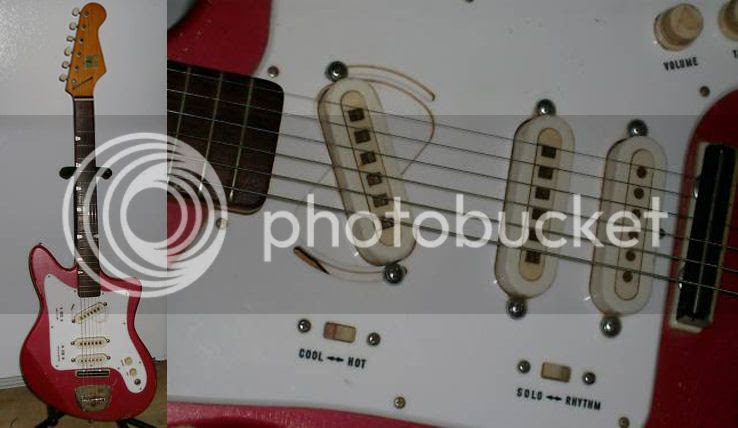 In the mid-1980s Wilkes Guitars came up with a guitar known as "The Answer" which featured what seemed like a novel idea, namely sliding pickups allowing for a whole spectrum of tones*. A couple of years later, Westone issued the Rail bass which also featured a sliding pickup. It was my belief that the precedent for this idea was the 1970s-era Gibson Grabber bass which featured a sliding pickup and which was so named because you literally grabbed hold of the pickup and moved it to the desired position (although admittedly it didn't travel very far).

Imagine my surprise to find for sale on eBay this Guyatone guitar from the 1960s (pictured above) which not only has two pickups biased towards the bridge position but also has a swivelling neck pickup and accompanying "Cool/Hot" switch. Guyatone were of course a Japanese brand and many examples of their guitars were built at the now legendary Matsumoko factory.

But is this the earliest example of a sliding/swivelling pickup? I expect that Guitarz readers will know of others, so please respond in the comments below.

I'm reminded, of course, of Rick Turner Guitars (which surely must be at the other end of the quality scale from Guyatone) and the Model 1 which has a pickup mounted on a rotating plate.

* Wilkes "The Answer" actually featured two coils that could be moved independently of one another and which could function separately as single coils or together as a humbucker. It really was a clever idea, the only downside was the appearance of the guitar itself that had a great big swimming pool cavity in the middle of the body.

NB: There are a lot of blogs STEALING content and bandwidth. If you read this anywhere else but on guitarz.blogspot.com then you are reading a blog that STEALS content. Please support original bloggers!