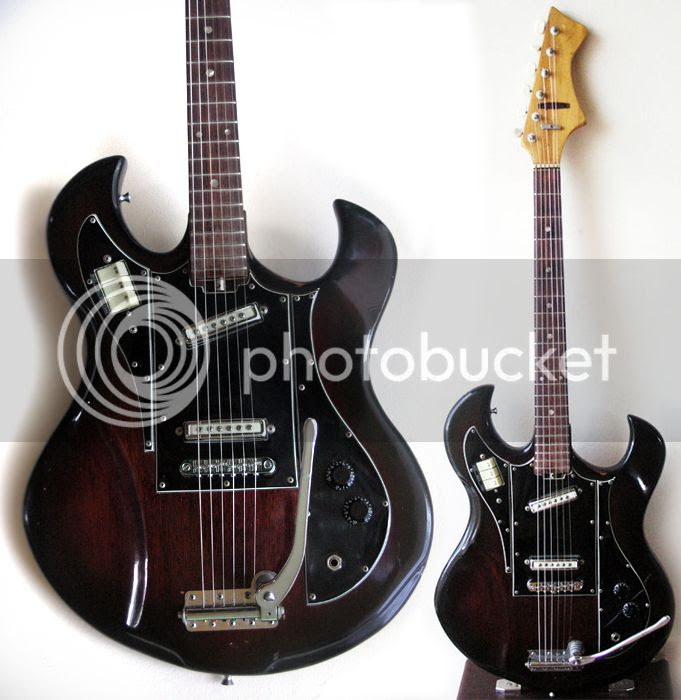 Now this one is absolutely fantastic! This is the kind of eBay find that I get a sense of excitement from - something that is unusual and kooky but which - given its provenance - ought not to play like a dog. I would defintely buy it immediately if only I could justify such a purchase.

Almost certainly hailing from the 1960s, it's a Japanese-made Hy-Lo brand guitar. It appears to be in very good nick, aside from the odd inevitable battlescar here and there, and has all its original parts including vibrato, which is surely the most likely piece to go missing on these period pieces.

The solid body on this guitar is delightfully enormous, with its dimensions being close to that of a Gibson 335, and which gives the guitar a cartoonish caricature of a guitar quality. The styling puts me in mind of certain wide-bodied Rickenbackers. It has a bit of a German carve around the body's top edge and base of the instrument and with a whole area scooped away in the right forearm region, whilst the angled front pickup is reminiscent of Mosrite guitars. Two of the three large rocker switches mounted near the upper horn select pickups (labelled MIC I and MIC II as on Teisco guitars - possibly related?), whilst the third is a tone on/off switch which is a bit of a peculiarity in itself. The split pickguards put me in mind of Burns. This guitar would seem to be a melting pot of influences. 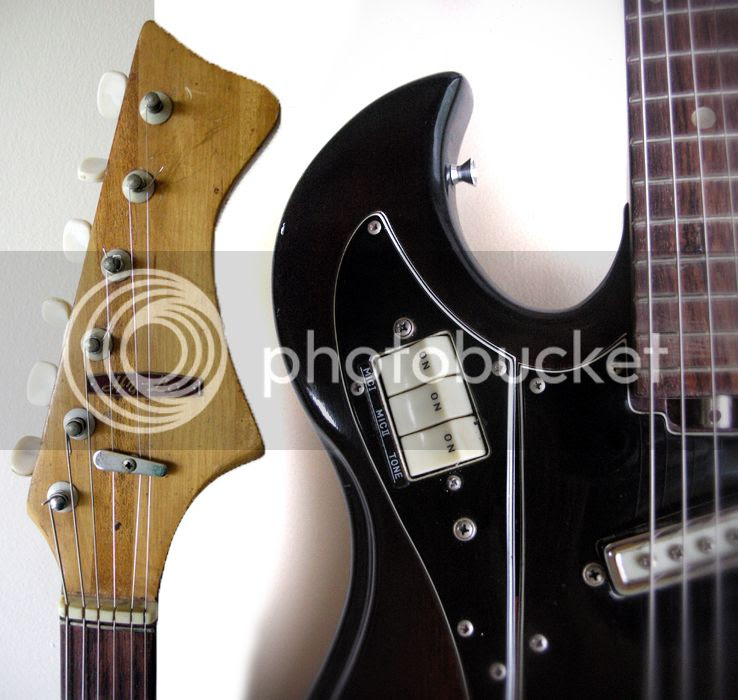 Very odd that someone has wound the strings on the wrong way. It doesn't exactly allow for a straight string pull. But that's easily remedied.

The volume and tone knobs are very unlikely to be original - they look too modern and out of place on this vintage piece. If I bought this, I'd seek out some replacements from the same period as the guitar itself.

NB: There are a lot of blogs STEALING content and bandwidth. If you read this anywhere else but on guitarz.blogspot.com then you are reading a blog that STEALS content. Please support original bloggers!
Posted by Gavin Lloyd Wilson at 4:28 pm