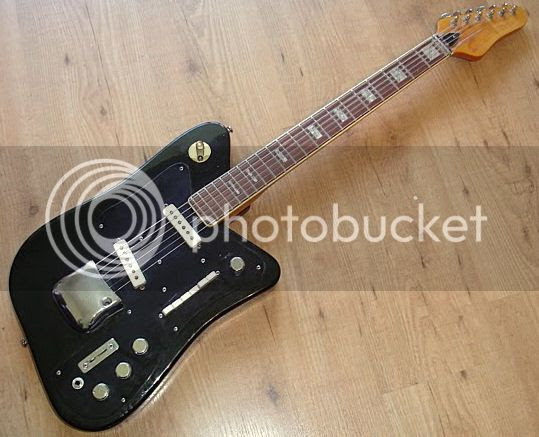 I was aware of the model name Vox Marauder but I don't think I've ever seen one before. Blimey, and I thought that the Telecaster was "slab-bodied"!

My guess is that this is another one of the Eko-built Voxes from the later 1960s. It certainly looks very Italian with all those controls including a row of push-buttons. As with many other Vox guitars of the same era, this guitar features built-in effects. Unfortunately, it seems that on this example the electrics need some attention - it shouldn't be too big a problem for someone who knows what they are doing.

It also appears to be missing the trem arm, and the cover for the switch on the upper horn. The square-edged single coil pickups look to be standard Vox issue, such as on the Vox Harlem that we looked at recently.

EDIT: So much for my guesses, apparently this Vox was all British!

NB: There are a lot of blogs STEALING content and bandwidth. If you read this anywhere else but on guitarz.blogspot.com then you are reading a blog that STEALS content. Please support original bloggers!
Posted by Gavin Lloyd Wilson at 3:42 pm