Harmony Parlour guitar, circa 1927-34, with airplane bridge in honour of Charles Lindbergh

Today I want to show you something that represents a minor footnote in the history of the guitar, but nonetheless is one of those little factoids that I find fascinating.

The above pictured "Mystery guitar" was recently being offered for sale on eBay. The seller was commenting that they had never seen a bridge quite like this on any guitar.

It is actually a Harmony parlour guitar featuring an airplane bridge, which Harmony began putting on their guitars in honour of Charles Lindbergh's Orteig Prize-winning solo non-stop flight in his aircraft Spirit of St. Louis on May 20–21, 1927, from Roosevelt Field located in Garden City on New York's Long Island to Le Bourget Field in Paris, France. At the time this was major news, spawning all kinds of merchandise and references in popular culture; Harmony were merely jumping on the bandwaggon and such was the sensation surrounding Lindbergh's achievement that Harmony went on producing guitars with these bridges until 1934. 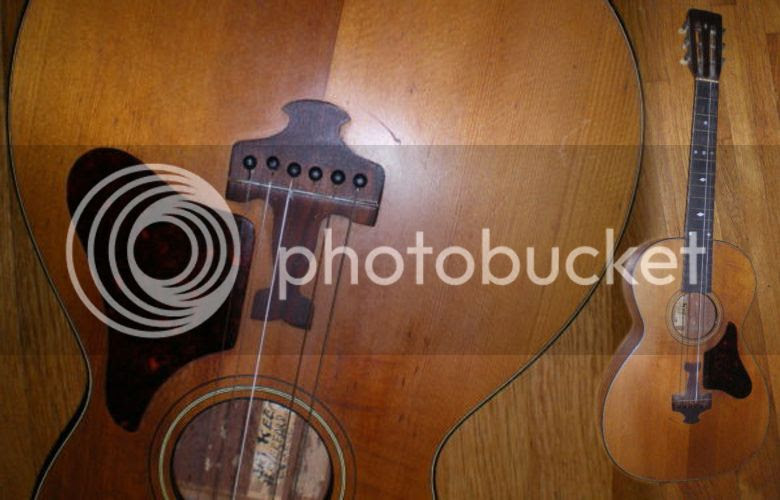 Here is another example of a Harmony with airplane bridge currently being auctioned on eBay.

Quite how the bridge affects the sound of the guitar, I couldn't say. On the one hand the increased footprint should transmit more of the strings vibration to the guitar's top, but on the other hand it could also have a dampening effect on the top. Nevertheless the eBay sellers have been claiming that these are incredible sounding blues machines. Take that as you will; it could be true or there may be a touch of eBay seller "spin" going on there.