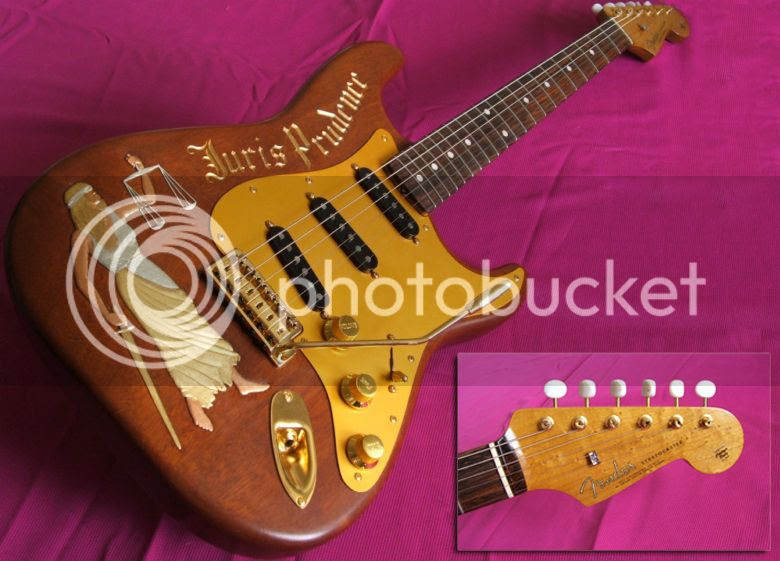 What to say about this? Ah, I'm going to be lazy and quote directly from the eBay listing:

SOLID MAHOGANY BODY CARVED BY FENDER CUSTOM SHOP MASTER BUILDER GEORGE AMICAY (www.amicaycustomdesign.com). A relief of Themis, Greek God of Justice is meticulously and perfectly hand-carved into the solid mahogany body with gold leaf caligraphy. The guitar was created in the 1990s to be used as a prototype for a guitar to be given as a gift to Fender General Counsel. The original work of art has been retained by the artist until now. The 2001 Fender American Vintage neck was made by FENDER CUSTOM SHOP MASTER BUILDER JASON DAVIS (also BC Rich and Jackson) using premium grade birds eye maple with Indian rosewood fretboard, an elegant match to this original prize piece for the serious collector. Expertly appointed by the artist himself in anodized gold hardware and new Fender Custom Shop pickups, electrical wiring, pots, switch and jack.

Prototype? Are you seriously telling me that it was Fender's intention to produce more than one of these? Surely not? I mean, who's it supposed to appeal to, a high court judge? Maybe the judge in this video, perhaps?

10cc - Good Morning Judge by 10CC
(Yes, I know it's Graham Gouldman before anyone points it out).