Star Wars Return of the Jedi "B" Wing Fighter guitar 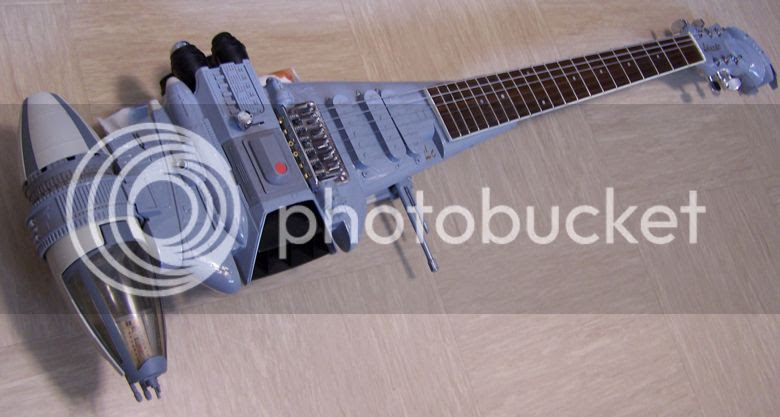 The Star Wars movies certainly seem to have fired the public imagination in many ways and we see their influence everywhere, including in the world of guitars where for example Fernandes have produced several limited edition guitars with Star Wars graphics.

Here we have a "B" Wing Fighter guitar constructed from a model of the fighter spacecraft from Return of the Jedi, neck from a damaged Aria acoustic guitar, and Stratocaster electrics. It was created by Tom Bingham, who reinforced the "body" with plywood and filled it out to a solid bar by using Gorilla Glue. Tom tells me that he bought the "B" Wing Fighter model at a car boot sale for £8 and constructed the whole guitar in his bedsitter without the use of any electric tools and estimates that the build cost about £100.

He has previously made a Millenium Falcon Telecaster and other guitars such as a chessboard guitar, winebox guitar, cigarbox twin-neck, some of which we may look at in the future.