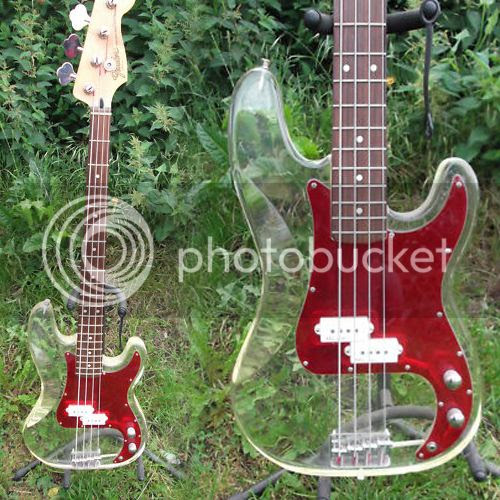 Here's one for the bass player who prefers a traditionally-styled bass but at the same time wants something a little more individual. Here's what the seller has to say about it:


One of several Fender precision bass replicas made for me from parts (some original Fender/Squier) by Bailey Bros. of Bristol. Used extensively as a back-up touring instrument with Who's Next - a tribute to The Who.

Here is an ultra rare plexiglass Precision Bass. The body is made of lucite acrylic. See-through plexiglass. The neck is a 1997 Fender USA Precision Bass Classic series bass which features a slim Jazz Bass profile maple neck with a rosewood board. The original Fender tuning pegs are present. The pickup is a white capped EMG AXL passive Precision Bass Unit. The bass is finished with an amber-sparkle coloured pickguard.

Apparently John Entwistle himself had one like this in his enormous collection, and it is also similar to the bass used by Charlie Jones who has played for Robert Plant, Goldfrapp and Siouxsie Sioux.

Currently being auctioned on eBay UK with a starting bid of £250. A word of warning: it's going to be very heavy which is most likely the reason that this was the seller's back-up bass and not his main instrument.