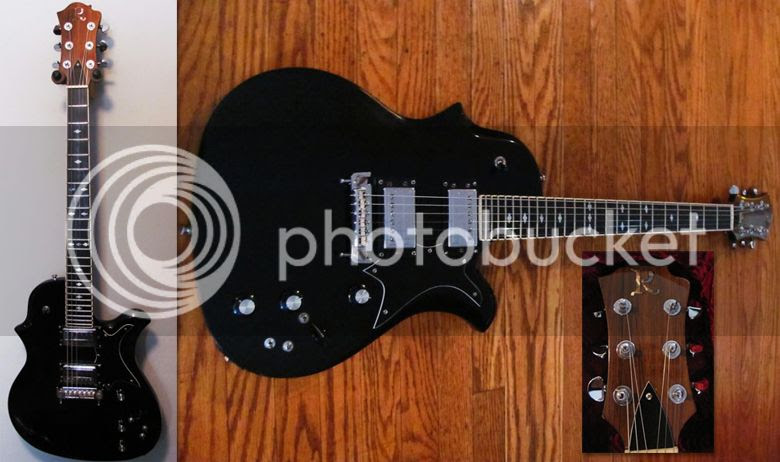 Without wanting to offend B.C. Rich afficionados, I have to confess that I've never really been a fan. Whilst I readily give them credit for designs which were very original and exciting when they first appeared from 1969 and through the 1970s and beyond, for me they were often awkward looking, too pointy, or unnecessarily over-complicated being covered in far too many controls. I did have a secret semi-fondness for the B.C. Rich Bich 10-string, but that was mainly because Ric Ocasek of The Cars made it look so cool.

The 1975 B.C. Rich Seagull seen here comes from their classic early period - it was designed in 1972 by company founder Bernardo Chavez Rico - when their guitars were solely made in the USA and the designs were fresh. Somehow latterday B.C. Rich designs look like the company have lost the plot, like they are a parody of themselves. They now represent a heavy metal stereotype whereas before they weren't actively meant as "metal" guitars, just as bold new designs.

I'm in two minds about the Seagull. Part of me likes it for being delightfully different from other guitars from the mid-1970s (remember this was during a period in which both the major players, Gibson and Fender, although trying hard were each going through a low point in their companies' respective histories in terms of quality of output). But another part of me finds the design quite ugly... although I can't quite decide if it so ugly that it's attractive. If that makes sense.

Currently on sale on eBay with a Buy It Now price of $1,850, I don't think that if I decide I do like it I'm going to be voting with my wallet any time soon.