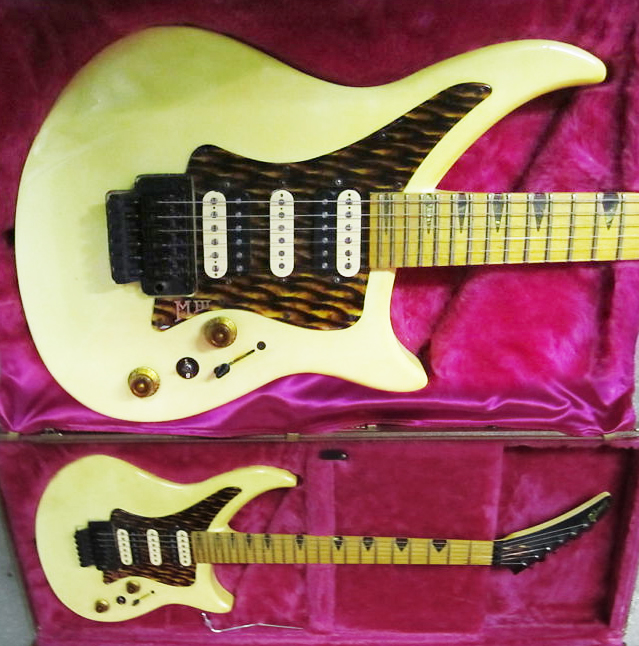 I don't know if I like or not this Gibson M-III, a quite unique guitar in my opinion. This guitar released in the early 1990s was Gibson's late move to get its share of the then flourishing market of the superstrats - too late, Grunge played on vintage budget guitars was about to refresh rock music and close the era of hair metal (that was about to turn into thin hair metal - this joke is not mine but it makes me laugh a lot, if I was 15 and hiding my pimpled face behind long dyed greasy hair, I could even write LOL) - and initiated the current vintage cult.


The M-III was then short-lived - Gibson like the other companies won't wait for decades anymore for a new model to catch - but its design is quite cool, modern and elegantly aggressive - it even has a Rickenbacker vibe, that can never be bad. It has 3 pickups, HSH, and the humbuckers are splitable, so with its 5 positions blade switch it makes 9 pickup combinations, the 10th one being a killswitch.

The zebra humbuckers have a function, they make clear that this guitar can be a strat style 3 singlecoils instrument, as much as a more Gibsonesque HB one. The 'tigershell' pickguard is also nice, but is probably the source of very ugly pickguards proposed on Gibson failure models of the last 10 years... When the M-III was cancelled, its electronics went to the Les Paul Lite M-III with its super light balsa body, and its design was used to create the Epiphone EM series.