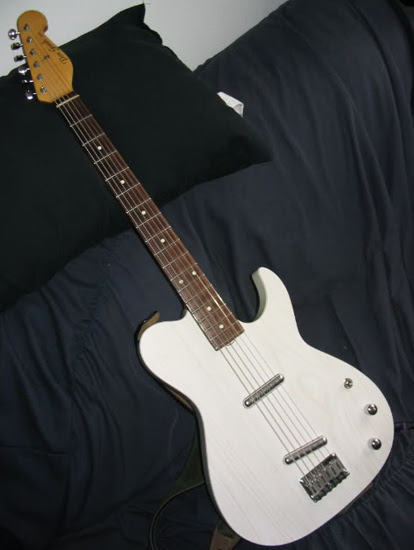 Yesterday I was surfing the Web tracking exciting guitars (I don't only do that to feed this blog but I fished also a couple of good ideas for my metal front guitar projects) and I found the Trussart Steelcaster Baritone above, that made me aware of something I never suspected before: there are baritone telecasters out there! At first it felt like a contradiction, since for me who love big semi-hollow bodies, the telecaster is such a small guitar!
So I checked around a little bit more and found out that though there are none produced in series, Warmoth and some other guitar parts companies sell baritone conversion tele necks, and that many guitar lovers make and play their own bari-teles like some call them (BTW it's so refreshing to be around guitar fans who don't care about schredding!)
The Trussart is without doubts a limited edition like all Trussart products, and the only other model that is not a conversion is the Don Grosh Electratone Baritone (on the right) that is actually just a prototype - I don't know how many were issued since I just found one, but the blending of a telecaster and a Danelectro feels right and I love lipstick pickups...
Anyway I'm thrilled by the idea of a baritone telecaster and that would be a cool project, I'm tempted...
bertram

edit: I'm told that the Fender Custom Shop actually issued baritone telecasters under the name Bajo Sexto... A quick Internet search shows no more info (but that there are also some called Subsonics) but I'll do a post about this as soon as I know more.

Guitarz - The Original Guitar Blog - now in its 9th year!
Posted by bertram at 3:18 pm