A few days ago, GL was talking about the fact that 12-string guitars, that were once a standard in solid body guitars - a post-Brit invasion trend for sure -, became rare nowadays. I absolutely agree that it's a pity, and reduces the range of what you can do with a guitar!
Here is a rare Gibson Firebird XII, a 12-string non-reverse version of the Firebird. The non-reverse body was produced between 1965 and 1969, when it appeared that the 1963 Firebird regular body - the reverse body as it's been called since the lower long horn felt so bizarre at the time - was a selling failure. Fortunately at this time Gibson was visionary enough to insist on its innovative designs, and the reverse body came back for good in 1972 (the non-reverse is quite ugly to me). Here you can find several photos of a Firebird XII, and you can see that it doesn't have the characteristic neck-through - another concession of the non-reverse phase... 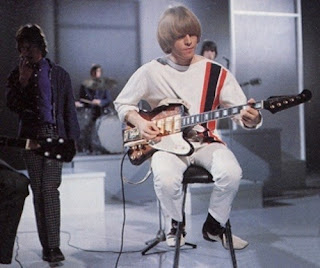 I wish they'd issue one day a reverse body 12-string Firebird XII, that would really fit this guitar and its out-of-time feel (12-string doesn't fit much to rock but as I've stated here already, for me the Firebird is the guitar of Brian Jones and PJ Harvey and is a perfect brit-pop guitar).


Hey people at Gibson, are you reading the Guitarz blog? You know what you have to do!
bertram


Guitarz - The Original Guitar Blog - now in its 9th year!
Posted by bertram at 8:05 am