I suppose one of the things we are sometimes guilty of on this blog is that to an extent we are living in the past. When looking for the weird, wacky and wonderful - indeed the blog-worthy - we look to the past all too often and not towards new and contemporary instruments. 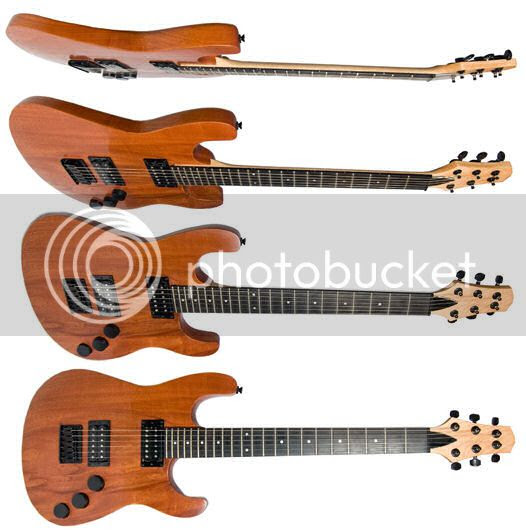 I suppose this is partly a backlash against the major guitar companies, who issue and re-issue subtle variants of the same old guitar models over and over. I'm sorry but I'm not going to go to the effort of writing a blog post about the latest Stratocaster offering from Fender that appears ostensibly to have no significant difference from the last one they were raving about. Gibson are a bit more amusing with their re-hashed designs with reverse bodies and guitars with holes cut out of them, but I'd rather leave this coverage to the other blogs and look for something more original. (And some of my fellow bloggers will sympathize when I mention the sheer onslaught of Epiphone press releases promoting the same guitars over and over. It doesn't put you into a good disposition towards a manufacturer.)

But, yes, here at Guitarz we are interested in genuine new products and innovation. We especially like the "little guy" who more often than not is behind the truly original and interesting guitar designs of the modern day.

I've been meaning to post about Z.S. Thomas Custom Electric Guitars for several months now but what with one thing and another and being slightly absent-minded these days, I kept managing to forget to do so. Until Seth Thomas himself, the luthier behind Z.S. Thomas guitars, gave me a kick up the arse (or "ass" if you're American - but in the UK that's just another word for donkey) and asked me when I was going to get around to it.

From the front the Z.S. Thomas guitar is a fairly recognisable design, but as you'll appreciate from viewing the graphic showing the guitar in rotation, the body is in fact ergonomically contoured and sculpted to fit snugly against the human form. 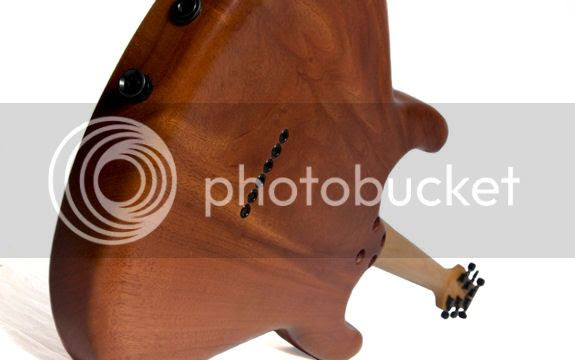 Now what the photo at the top of this post doesn't show you is the rear of the guitar. I so wanted to show you a picture of the rear, and so have taken one from the Z.S. Thomas website.

Now, looking at the photos above and the one here on the left, what do you notice?

Anything unusual at all?

Anything missing in fact?

You'll see that there is no pickguard on the front of the guitar, but also no access plates on the rear of the guitar.

So, the $64,000 question is, how does Mr Thomas get all the electrickery inside?

Here's the cunning part. It's an invention call the "pot pod". Other than the pickup routing, the only other routing in the guitar is a circular hole beneath each of the volume and tone controls. The volume and tone pots are each mounted in a little unit - the pot pod - and these are inserted into the holes. Very clever. And which leaves for a guitar with a minium of routing, no extraneous cavities, and which should resonate all the better. It also, of course, has a very neat appearance with no plates on the front or back, because they simply are not needed.

If I did have a criticism, I'd say that I'm personally not too enamoured by the oversize knobs, no doubt chosen because they cover the whole of the top of each pot pod (1.25" diameter), but these are custom-built guitars and I'm sure Mr Thomas would oblige with a different choice of knob if that's what the customer asked for. There must be plenty of knobs of a top-hat style with a wide lower flange that could cover the required area. But as I say, this is just a very minor issue, and a purely personal one.