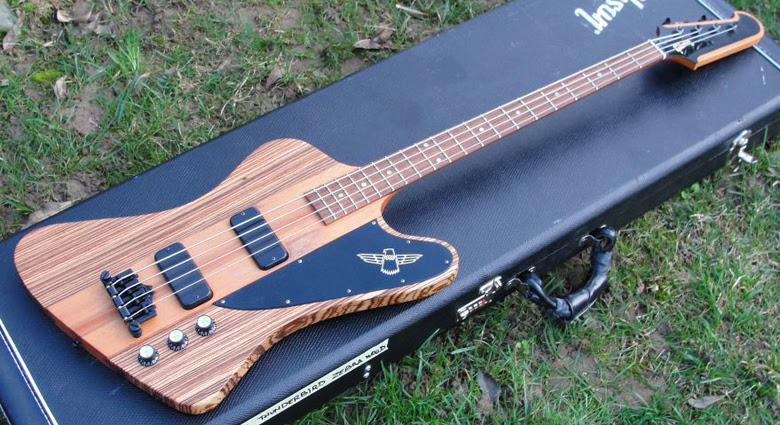 You can't talk about Firebirds without mentioning its bass twin, the almighty Thunderbird!
The Thunderbird Bass was also released in 1963, and with the same design, it seems almost more radical than the guitar, because at the time there was not so many other basses to compare with - Fender's pioneering Precision Bass was of course dominant, you had Gibson and Hofner's violin basses and Rickenbacker 4001, Fender's new J-bass and a few more models and brands...
Thunderbird was also Gibson's first long scale bass (34" - actually, being European, I never really understood what " stands for!)
Here is a late limited release of 2007, made of zebra wood (an exotic wood from an endangered species that might have contributed to Gibson's recent trouble with law). I like the contrast between the elegant wood and the iconically rock design. Thunderbirds have pros and cons, I'm definitely pro - I play a new Epiphone Thunderbird Pro that is both versatile and with a strong personality, and I'm 100% happy with it.
bertram

Guitarz - The Original Guitar Blog - now in its 9th year!
Posted by bertram at 10:58 am